Women Behind the Wax

Back in 2010, if someone would have said that Kansas City would have four successful vinyl record stores less than four miles apart in the next decade, you might have thought they were crazy. Perhaps more interesting is the fact that all four are owned and/or managed by women. Just a coincidence? I’ll leave that for you to decide.

We’ll take you to four shops that each portray its own unique personality while providing a great atmosphere for locating and discovering your next favorite record. 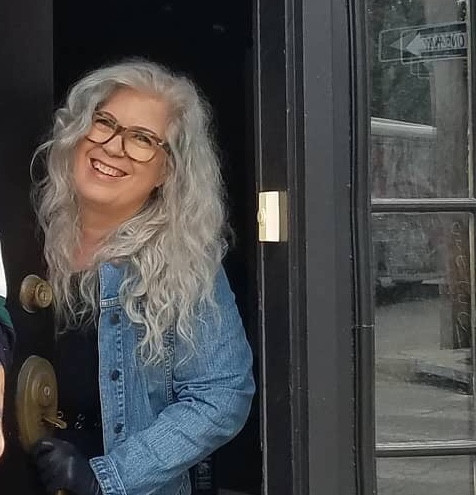 When Judy Mills went into a local record store looking for Bon Iver’s self-titled album on the day of its vinyl release in 2012, she was a little surprised to be told that it wasn’t in stock. She was even more confounded to find that it wasn’t a common practice to have vinyl copies on hand on release day.

"I thought having a new release day again would be fun. A lot of that culture, like in-stores, should be a vital part of the community… So, I opened a record store with the mission to bring that back."

“I think the personality of any business reflects the people in the building. I try to cultivate an inclusive, service-friendly, professionally-run business that nurtures the community and the people that work in the store… that isn't just the excellent collection of records and books, but the service and the atmosphere and the energy of the store.”

Vinyl record sales have increased exponentially since Judy opened the store in 2013, but some attitudes have been slower to change.

“Often people still think the guy working is the owner, or that my husband or dad started the business.” Despite these lingering examples, she maintains the kind of inclusive attitude that has contributed to Mills Records being repeatedly voted Kansas City’s best record store.

“We never judge. We celebrate all kinds of music and genres. We’ll never be High Fidelity music store snobs.” 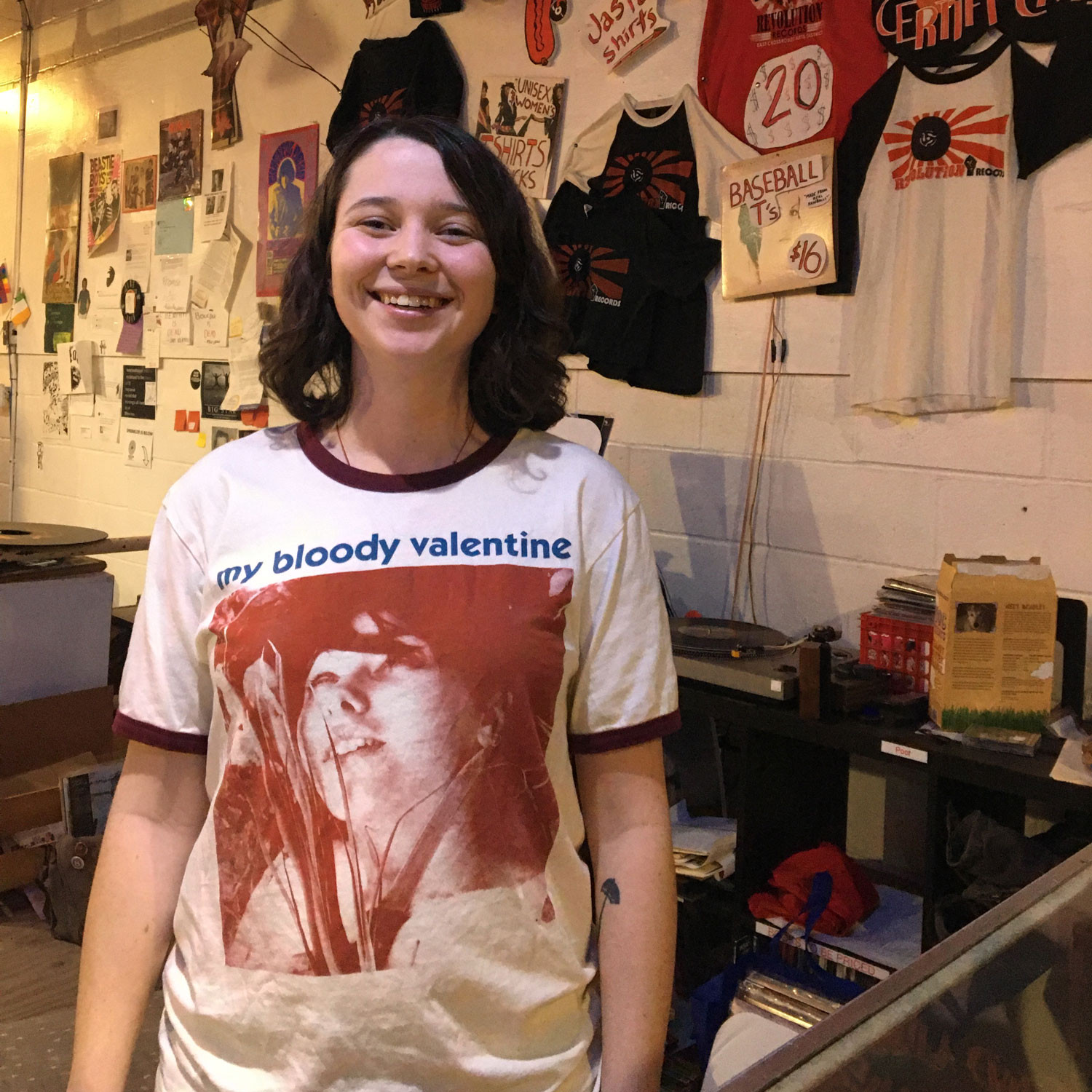 “Without record stores, I don't know what I'd do. I grew up listening to records with my family. I’d always wanted to work in a record shop as a teenager. Something about holding the cover, the physical media, turning on your turntable, dropping the needle, it just makes it all feel so much more real.”

On being a woman in the record business: "There are so many cool women working in shops around KC. When I first started going to record stores, I almost never saw women behind the counters. Often the older men working would say sexist things and call women pet names. You don't see that as much anymore, at least not around here, and that makes me happy. I've seen a lot of support from our awesome community. I've had plenty of women tell me they don't normally like to go to record stores but always feel comfortable at Revolution.”

On Revolution’s uniqueness: “Other than the fact that we have the world's coolest dog, Jasper, we tend to specialize in more offbeat records. We've got tons of experimental LPs, Japanese noise, psych and city-pop records, a whole section of krautrock. If it's weird, we're probably into it. In addition to that, we've got plenty of classic rock, punk, metal, hip-hop, Blues, electronic and more. We’re also a bookstore specializing in poetry and classic literature. We have an in-house publisher of surrealist and avant-garde poetry called 8th St. Publishing Guild. We're definitely not just an average record store!” 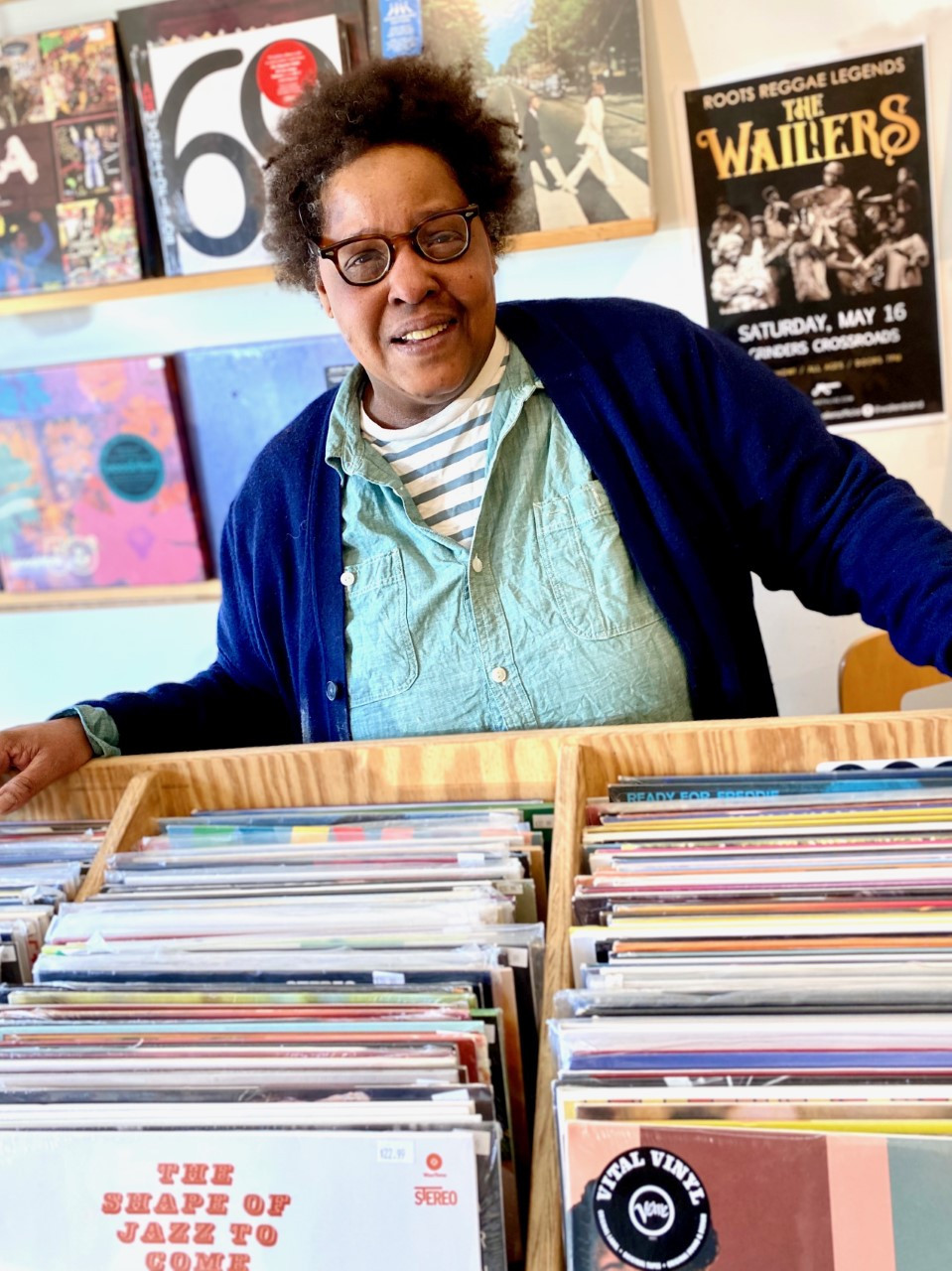 Even though she was managing the music department in a big box store six years ago, Marion Merritt was still hanging out in record shops. “We never believed that vinyl was just a trend,” she said. “We all consume media and data on multiple platforms and vinyl is one of the great choices.”

In 2014 she took the plunge and decided to open up her own store, Records With Merritt, joining what she calls “a long tradition of record stores in Kansas City.”

Marion takes a pragmatic approach when it comes to the business of running a record store: “Respect in the business has always had to be earned, no matter the gender. The love of crate digging, the reaction to a really great song or beat, and the appreciation of what it takes to put out an album knows no age, race or gender.”

Providing a relaxed and attentive customer experience is Marion’s No. 1 priority. “We believe it's paramount to show compassion and empathy, to treat each person who chooses to walk through our door like family or guests in our home.”

Similar to a small-town diner or old-school barbershop, Marion sees her store as a community hub.

“We believe we've created a safe space where our customers can meet, share music with us and each other, and discuss the stories of the day. I have always believed that Kansas City's record stores are an integral part of the heart of our community.”

Records With Merritt deals exclusively in new vinyl with an emphasis on personal service. “We made the decision from day one that we would specialize in new vinyl, which sets us apart from the rest. Our customers, new and old, have shared that they love our curated collection and the variety of titles we carry… be it special ordering, hand-delivering product or personally curating collections for our customers.” 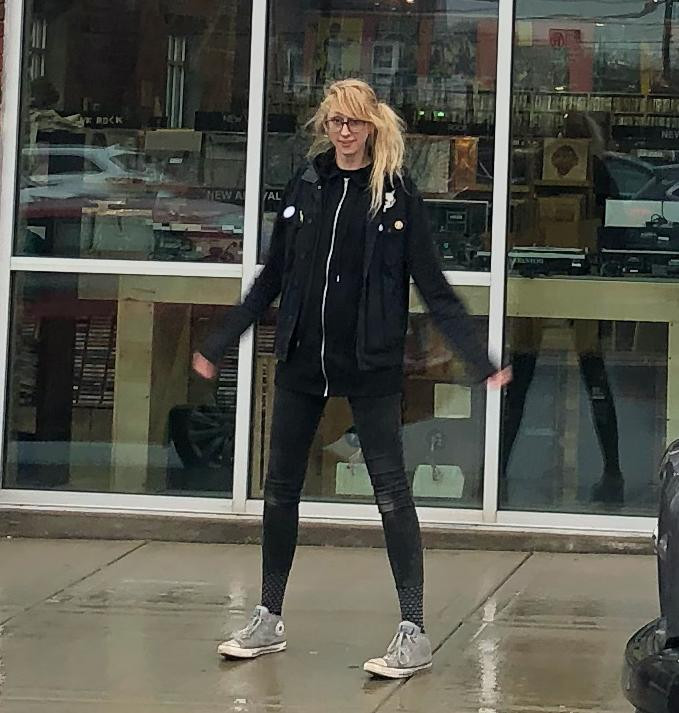 Britt Adair studied video at the Kansas City Art Institute. “I think my reason for working at record stores has changed significantly since my beginning. The visual art community ran parallel to the music community around the time I graduated. For me, the lines blurred… Punk rock music got me and I got it, and we fell in love.”

As well as helping run Josey Records Kansas City, Britt plays guitar in legendary KC punk band The Bad Ideas. “I went to lots of live shows, purchased records and cassettes at those shows, and wanted to create music myself. I taught myself how to play guitar.”

During a “grim” period in her life, fellow Josey manager Christian LeBeau texted Britt to meet him for a drink to discuss a “fresh and new opportunity” where, as Britt puts it, she “could be creative and work at a kick-ass record shop.”

“I was then part of the Josey crew. I helped put the first records on the shelves a little over four-and-a-half years ago. I don't run the shop — we all do. We don't really have titles; we just do what we're good at. Christian is the manager and runs the place, but we're a crew… and we all do it all.”

On her place in the record industry: “There's really not a handbook or formula to making a record store survive, you just learn with time and practice. To be honest, whether I have ovaries or not has never made a difference at Josey Records. If anyone challenges my rights to equality — there's the door — and I know my crew has my back. Gender doesn't seem to exist to the upcoming generations of music lovers.”

She talks about her fellow workers as if they were a band. “Our small crew works hard and we're building something… I take pride in my work and consider myself an equal to everyone that walks in the door.”

“Josey Records is never boring — that's what makes us unique. Our customers are from every walk of life and diversity is encouraged. We're the music spot for adventurers, travelers and misfits.”

Due to COVID-19 health and public safety concerns, it might be a little while until you get the chance to visit one of these stores, but that doesn’t mean you have to stop listening to records. All of these stores have options for ordering online. It’s a difficult time for all of us and I’m sure they would appreciate the support. Perhaps we could all use a little of this time to fall in love again with some of our favorite records, or maybe even discover something new.

—Matt Roth writes and plays music under the name Major Matt Mason USA and is one half of the band Schwervon! His other music projects include the bands Broken Heart Syndrome and Kansas State Flower. His first chap book of poetry entitled 'Dad' was recently released by 8th St. Publishing Guild.

Bridge Artist of the Week: Waxahatchee