Now playing: Out of My League Fitz and The Tantrums
909 News

Getting There: Wilco’s Long Road to the Top

Filling the Void Left by Tom Petty and the Heartbreakers

Now in its 25th year, Wilco stands as a marvel of endurance, longevity and consistency.

Since 1995, the band fronted by founder Jeff Tweedy has released 11 full-length albums, without a dud among them. They also released two dandy “Mermaid Avenue” albums in which, along with British songwriter Billy Bragg, they set to music the words of Woody Guthrie.

Wilco has survived for a quarter of a century despite a series of significant personnel changes. Tweedy and bassist John Stirratt are the only remaining founding members. Six others joined and left the band from 1994 to 2004, including Jay Bennett, an integral part of early Wilco albums, who was fired in 2002.

The prelude to Bennett’s firing was documented with some brutal candidness in the documentary “I Am Trying to Break Your Heart,” which captured Tweedy in the throes of addictions and chronic migraines and a band roiling in turmoil. (Bennett did not take his ouster amicably; he sued the band in 2009, just weeks before he died unexpectedly in his sleep.)

That’s the kind of seismic turbulence that can capsize a band, but in 2004 Tweedy found his music soulmates. The current Wilco lineup has been together for 15 years, and it is as stellar a band as any out there.

Earlier this year, they released “Ode to Joy,” and if it’s not the best Wilco album, it is certainly among them — a testimony to the band’s ability to renew creative impulses and assiduously avoid repeating itself. (Wilco is playing the Arvest Bank Theatre at the Midland on Sunday. Showtime is 7:30 p.m.) 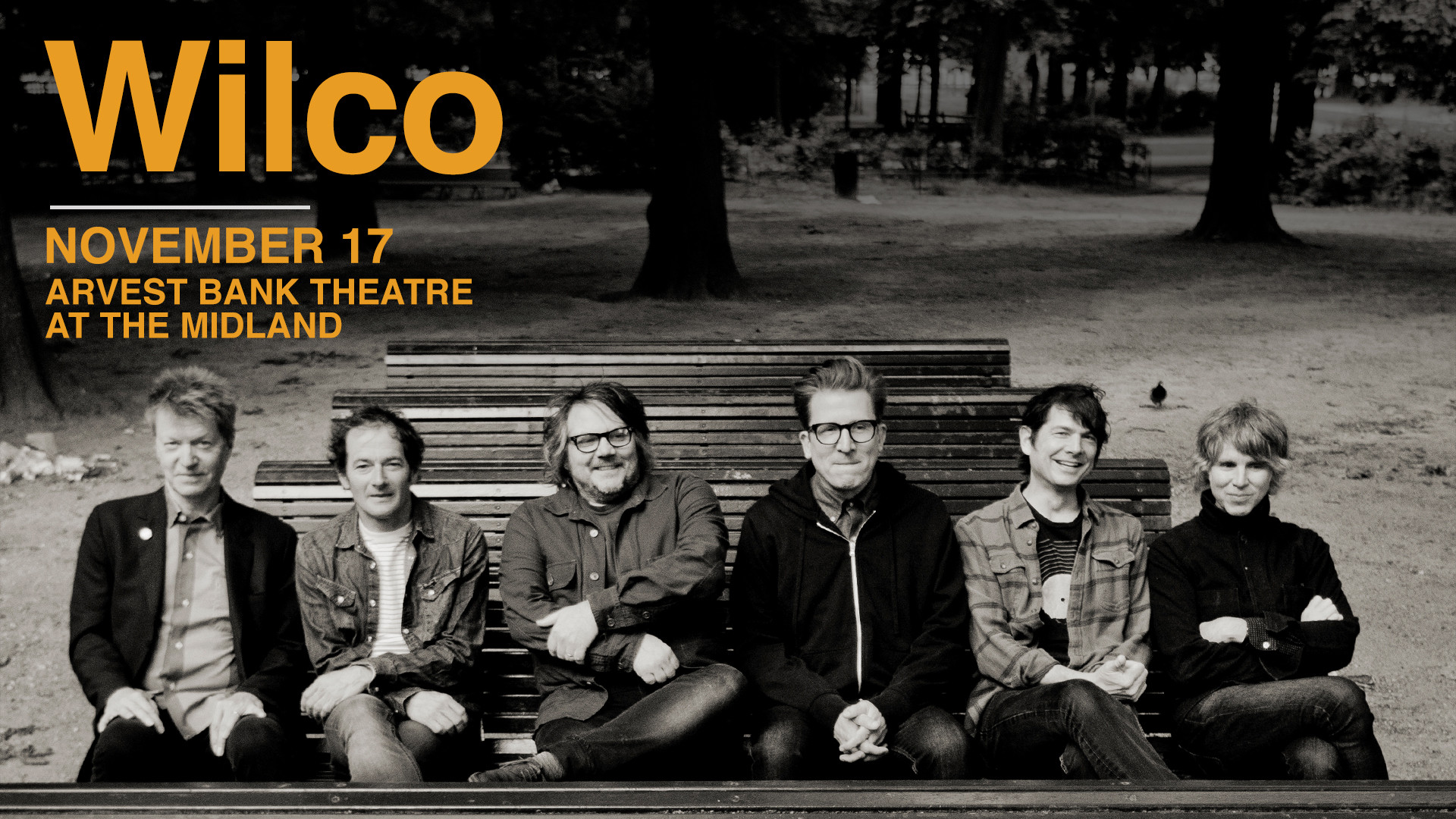 Reviews of “Ode” have been widely positive, despite the album’s being as stripped down and barren as anything the band has ever produced.

In his four-star review, a critic in “The Guardian” wrote: “These are songs where the expressiveness of the lyrics and the baldness of the music—-usually big, simple blocks, put together like Lego—work in tandem. The plainness of the instrumentation heightens the uncertainty and ambivalence in Tweedy’s writing.”

A writer at Vice.com was even more impressed. The headline to his review: “‘Ode to Joy’ cements their legacy as the greatest band of our time.”

That’s a bold sentiment with which the ever-humble Tweedy would likely take issue. In interviews he has regularly referred to Wilco as a mid-level band, one whose legacy is eclipsed by true leviathans like Radiohead.

But there is merit to the proclamation. For two and a half decades, as it changed and improved as a band, Wilco has nurtured and grown a devoted fan base. And more than anyone, Tweedy, the band’s heart and soul, deserves credit, at least more than he gets.

He’s not often mentioned among heralded peers like Jason Isbell or Ryan Adams or Josh Ritter — he didn’t make a Rolling Stone list of the 100 greatest songwriters (Taylor Swift did). But Tweedy’s prodigious output certainly deserves consideration, going back to his earliest material.

His first major band, alternative-country heroes Uncle Tupelo, released five albums from 1990 to 1993. The band’s primary songwriter was Jay Farrar, and in his autobiography “Let’s Go (So We Can Get Back),” Tweedy, a nascent songwriter back then, admits to being intimidated by Farrar’s songwriting chops, especially his way of addressing darker themes.

“Jay has a song...called ‘Before I Break,’ which is about a guy drinking himself to death and losing any hope to even see beyond tomorrow and he ends up ‘half drunk in a ditch by the side of the road,’’ Tweedy wrote. “Me, on the other hand, I contributed ‘Screen Door,’ which is about wearing loose clothes because it’s too hot, skipping school, and playing songs with your friends on the porch.”

But Tweedy’s contributions were substantial, and from one album to the next you can see his steady growth as a songwriter.

“Screen Door” may be a breezy ditty, but he also contributed songs like “Black Eye,” a tale of abuse from a guy who eventually “took down all the mirrors in the hallway / And thought only of his younger face”; and “Gun,” a song about sorrow and loss: “My heart it was a gun / But it’s unloaded now.”

Farrar quit the band unexpectedly in 1994, after it recorded its only major-label record, “Anodyne,” which includes some of Tweedy’s best Uncle Tupelo songs — “Acuff Rose,” “The Long Cut,” “New Madrid” and “We’ve Been Had.”

The band’s breakup was blindsiding, the divorce messy. Tweedy was shell-shocked. “Too much reality can be depressing, and I was up to my eyes in it,” he wrote in “Let’s Go.”

But he retooled and reloaded and launched Wilco. Its first album, “A.M.,” was released in March 1995, about 10 months after Uncle Tupelo’s final show.

“A.M.” bore the spirit of much of Tweedy’s work on the final Uncle Tupelo albums. Songs like “Box Full of Letters” and “Passenger Side” remain fan (and concert) favorites, but Tweedy’s take on the album was guarded: “Nothing I had written for ‘A.M.’ felt like it broke new ground, but I felt like I had a solid batch of quality songs to work with.”

Reviews of “A.M.” were mostly room temperature, unlike reviews of Farrar’s first album as Son Volt, “Trace,” which became an instant classic. Tweedy noticed the difference and decided it was time to pivot quickly toward new ground.

“Being There,” the band’s sophomore release and the first with Bennett in the studio, would prove to be a defining moment: Tweedy’s shedding his alt-country heritage for many flavors of rock and heading off into more diverse and experimental terrains.

From rock critic emeritus Robert Christgau: “His simple melodies, felt vocals and easy stylistic sweep all evoke a past when roots music came naturally, from bluegrass to the Rolling Stones.”

In “Let’s Go,” Tweedy calls the album “the light going off in my head of ‘I don’t have to limit myself to the musical interests that Jay Farrar and I had in common.’ It was a real epiphany.”

It was also the beginning of a reign of releases that consistently rebooted and refreshed the band’s sound and challenged fans to enlist in the next ambitious, if not unpredictable, odyssey.

Album No. 3, “Summerteeth,” is a pop extravaganza (and many Wilco fans’ favorite, me included). “Pitchfork” wrote that the album “witnesses the band dismissing its country-rock sound for a studio sheen that would make Brian Wilson proud.”

The follow-up, “Yankee Hotel Foxtrot,” arrived with its own myth attached: Because it was so surreal and experimental, Reprise Records refused to release the album. Instead, it cut loose the band.

“Yankee” was eventually put out on Nonesuch Records, but not before it had been streamed online to hundreds of thousands of fans.

What they heard was like nothing Tweedy or Wilco had ever produced. David Fricke in “Rolling Stone” wrote: “There is genuine bedlam here. Creepy pianos and whooping synthesizers zoom in and out of the music like pissed-off ghosts. The close-miked vocals of songwriter-guitarist Jeff Tweedy have a strong edge-of-madness air.”

“Yankee” would be Bennett’s swan song with Wilco. Its follow up, “A Ghost is Born,” can be an arduous, discomforting listen, as if Tweedy was daring “Yankee” loyalists to go even further into his madness.

It includes “Less Than You Think,” which ends with a 10-minute hurricane of unnavigable noise, a black morass of synths and guitars that Tweedy has said represents the migraines that contributed to his painkiller addiction.

“Ghost” represents another turning point in the history of Wilco. The next album, “Sky Blue Sky,” released in 2007, was the first with the band’s current lineup, including guitarist Nels Cline and multi-instrumentalist Pat Sansone, who both climbed aboard in 2004 and represented the 10th personnel change in 10 years.

Fifteen years later, this version of the band has issued six albums, each smart and endearing but differing in mood and intent. Along the way, Tweedy has matured as a lyricist, one who can be as candid and witty as he is astute and observational.

In a essay for The New Yorker in 2018, writer George Saunders called Tweedy “our great, wry, American consolation poet… Jeff told me once that what he’s trying to communicate to his listener is, ‘You’re O.K. You’re not alone. I’m singing to you, but I also hear you.’”

In 2019, Wilco has forged itself into a complete and perfect ecosystem: an ensemble of six adventurous, creative artists who inspire each other and respect and admire what the others bring to the table, a collection of studio aces and road warriors. Their generation’s Tom Petty and the Heartbreakers? You could make that case.

Insecurities be damned, Tweedy (like Petty) has surrounded himself with ringers and virtuosos like Cline, who, when not with Wilco, tends to dabble in wildly experimental projects, like a recent gig with free-jazz maestro Anthony Braxton.

Yet in an interview with Spin, Cline said he often defers to Tweedy and his instincts and intuitions when it comes to getting Wilco songs “right.”

Speaking specifically about adjusting to the austerity of “Ode to Joy” arrangements, Cline said: “My first impulse is generally straitlaced. I don’t immediately go for deconstruction. So it usually takes Jeff getting me to strip away a lot of habits that I tend to fall into — making positive suggestions, steering the ship… My motto has always been to do what’s right for the song.”

Mottos like that are what prevent jealousy and bruised egos and keep a group together for decades. In a Rolling Stone interview, Tweedy talked about getting back together to record “Ode to Joy” after an extended hiatus.

“We’re as excited as we’ve ever been,” he said. “Maybe a little bit more, because it’s coinciding with the end of a pretty long stretch where we haven’t seen each other a whole lot. I’m expecting it to have the feel almost of a reunion, but for a band that never broke up.

“I’ve definitely missed the sound of those six people onstage. It’s like getting to hang out with my closest friends again.”

You can sense that spirit during live shows, among the band and among fans, that sense of community and camaraderie.

Those of us who have been there from the beginning (my first show was at the Granada Theater in 1995), who have experienced this long voyage and all its thrills and dramas, know the best news about “Ode To Joy” isn’t that it may establish Wilco as the “greatest band of our time.” It’s that it signifies the band is still thriving creatively, still touring and arousing the joy — and consolations — we get from being there.

–Timothy Finn wrote about popular music for The Kansas City Star from 1996-2018. He now writes about music for IN Kansas City magazine and co-hosts a music show every Thursday from 4 to 5 p.m. on 90.9 The Bridge.

Wilco is also The Bridge's Artist of the Week. Tune in for a chance to win tickets to Sunday's show, and read some related content on the band at this link.

A Shot in the Arm

I’m The Man Who Loves You