Plaza Academy is a little off the beaten path of traditional education. And that is one of its many strengths. But finding the beat is an integral part of one of its successful programs — Beat Academy, founded and taught by local producer and emcee, Justin Gillespie.

Gillespie, aka Info Gates, is also one of the area’s most renowned hip-hop producers. He cut his production teeth in 2006 with local rap duo CES Cru and joined them on Tech N9ne’s Strange Music label when they inked in January 2012. Since then, Gillespie has produced for many of the iconic label’s artists, as well as stepping out from behind the boards to emcee a slew of solo albums released under the Info Gates moniker.

“Hip hop is kind of a gumbo of all genres. It can be jazz-influenced, pop-influenced, reggae-influenced — whatever you want to mix it up with. So it’s not really stuck in the box that a lot of other genres are,” Gillespie said.

In much the same way, Gillespie’s program tries to break out of the confines of traditional music education. Gillespie was inspired to start the Beat Academy in 2017 after running a similar program during a summer camp session at a neighboring school. After seeing the impact that program had on the attendees, Gillespie developed a curriculum, put together a proposal, and took meetings with schools in the metro area.

In the end, the Beat Academy found a well-suited home at Plaza Academy, where Gillespie himself graduated from high school. Gillespie said the school’s mission, its progressive approach to education, and its dedication to providing a nurturing environment for students that tend to struggle in traditional school systems were key factors.

The curriculum for the program is very hands on. Gillespie introduces students to FL Studio and MIDI controllers, teaching them the basics of both. Then he tasks them with small projects, like creating remixes of existing songs or utilizing acapellas of popular songs to create new instrumental tracks. Through experience, the students learn the software and hardware, but they also learn how songs are structured. Eventually the students learn to create a song from scratch — collaborating and critiquing others’ work in the process. 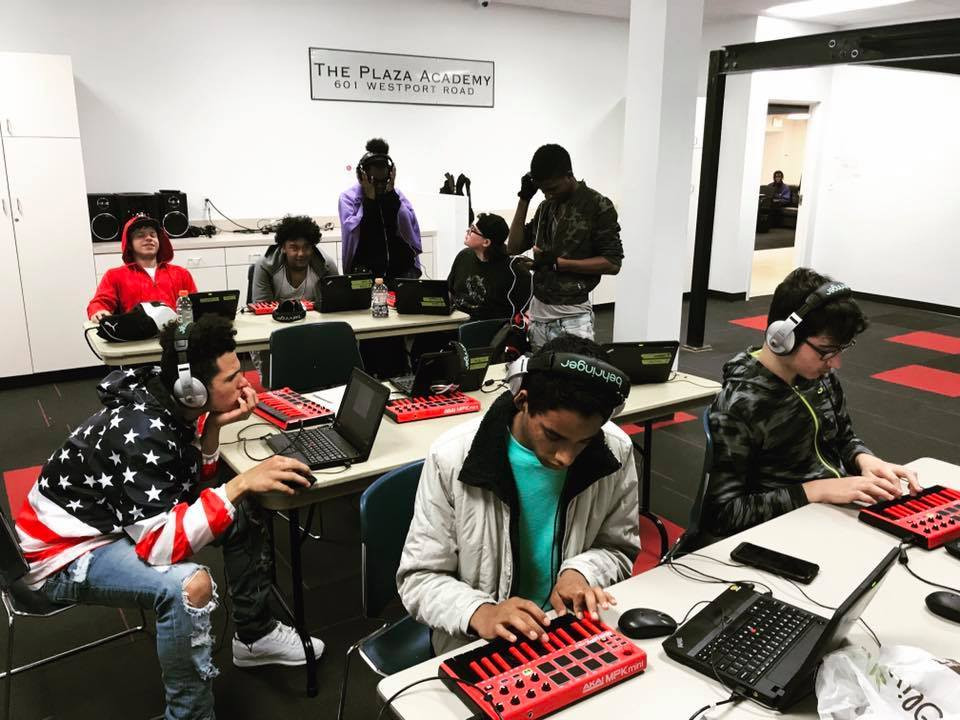 Students from the Beat Academy work on music during class. The program was started in 2017 by local producer and emcee, Justin Gillespie aka Info Gates.

Gillespie was able to tag on an additional step in that process this past winter, when his program was able to raise an impressive amount of funds to build a full-fledged recording studio at the school. Now, the producers in his class can collaborate with emcees to create fully homemade tracks. And that prospect has ballooned the student body’s interest in his program.

More importantly, the new studio has led to the program’s first album, entitled “Beat Academy of Kansas City.” The first single from the album, “Can’t Complain,” was released on May 19 and features local rapper and Gillespie’s labelmate, Joey Cool. And that collaboration is a shining example of why Gillespie is uniquely qualified to run the program.

“One of the greatest values I can bring to these kids is the fact that I can share my platform with them. I can introduce them to professional rappers, DJs and promoters who can give them advice and insight,” he said.

That experience has had profound effects on the students who take the class. Gillespie said many of his first-year students enter the class as timid and apprehensive participants, but have become ambitious leaders in the program. 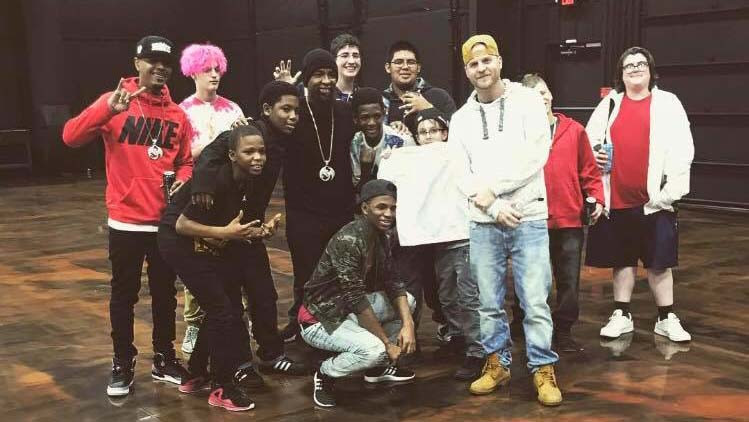 Students from the Beat Academy pose with Tech N9ne, who visited the program last year. Gillespie said he’s fortunate to be able to use his industry connections to bring in professional artists for instruction and mentorship.

He recalled one such student, Timmy Lona, who had grown so much in his abilities that Gillespie recommended him for a music video for the Greatest Showman hit, “This is Me.” The video was organized by the “Queer Eye” cast, who were temporary reality TV show transplants in Kansas City last year. Lona is one of three performers featured.

Thom Van Til, who was heavily involved in the class’ forthcoming album – both as a producer and emcee – said the program has worked wonders for his confidence and helped him to develop stronger relationships with classmates.

“Something I’ve noticed among everyone is that there is a lot of mutual respect,” Van Til said. “When you see someone that you might not necessarily like otherwise and they hop on a track and put themselves out there, you can’t help but respect that courage. I think that’s definitely a positive impact.”

That mutual respect will certainly be on display this Friday, May 31, as the program hosts its second annual end-of-the-year celebration, The Beat Academy Block Party. The event will give the students an opportunity to perform the tracks they’ve recorded for the album and will be followed by encore performances by Tiggz, Suli4Q, Info Gates and Godemis of CES Cru, and others.

But for Gillespie, the performance will represent the best of what he hopes his students pull from the class.

“The music is a tool to teach them some important core values in life and maturity,” Gillespie said. “To be competent, to be proud of the work you do, to not second guess yourself, to not find excuses not to do things you want to do, and to not let other people tell you you can’t do them. And the music is a great way to teach them that.”

The Beat Academy of KC Block Party, featuring a debut of the program’s self-titled record with performances by students, will take place on Friday, May 31 at the 18th Street Union (512 E. 18th St.) from 6 to 10 p.m.