Sympathetic Vibrations: This Is Addie

Bright futures can be hard to come by in the music industry, but the local music scene has had the privilege of watching The Greeting Committee’s once auspicious talent transform into present-day success.

Back in 2015, I had the opportunity to speak with lead singer Addie Sartino and the rest of the band. At that time they were fresh off the near-viral success of their debut EP and had just inked a deal with Harvest Records. The band was annoyingly young. But even then, their level of passion and determination for music made it seem like anything was possible.

Four years and a few releases later, the group has become unlikely veterans in the local scene despite still being on the fresh end of their 20s. Last October brought the release of the band’s first full-length LP, “This Is It” – a coming-of-age record that saw the band switching up its style and leaning into its members’ school band origins. And the success of that debut has carried the band through an unmistakably successful national tour that caps of this week with a slot at Boulevardia.

We caught up with Sartino, the band’s lead singer and principal songwriter, after a long road trip to Minneapolis during the final week of the tour, to talk about the new record, the Boulevardia gig and the band’s new “no creeps allowed” policy.

Congrats on the new record. Based on your social media posts, it seems like the album has really resonated with your fans.

Sartino: Yeah, it’s really crazy when people in other cities know the words to all the songs at our shows. I’m not sure if it’s the record or our previous touring history, but I’m excited either way. And doing this tour has kind of been a nice reward. We’ve taken baby steps as a band and really tried to do this as organically as possible. And on this headline tour, we’ve had six sold-out shows. I don’t think we could have guessed that would happen on this tour. But to see a room of 250 people packed out and excited to see us is just crazy. And we’re really lucky that doing it step-by-step is paying off. It makes us feel like we’re doing something right.

“This Is It” is definitely a Greeting Committee record, but you took some risks with the sonics. Do you feel like the band has found its identity with this album?

Yes and no. We had the ability and the resources to write with the intention of having horn players, string players and background vocalists, so that was very new and exciting for us. And at the time we were recording it, I thought we’d finally found our sound. Little did I know six months later I would feel completely different. And I think that’s one of the things about music – it’s constantly changing. And the four of us as individuals and writers are constantly changing as well. At the moment we’re working on an EP, which will be a nice transition as we go to write our second full-length record. And I think we’re going to try to find a balance between something that will allow us to reach and dream, and something that feels familiar.

There are a lot of themes that seem to get attention in the album’s lyrics – like internal conflict, interpersonal conflict, love and growing up. Did you set out to make a coming-of-age record or is that just how things came together?

My headspace for the record was really a place of reflection. If you take the album as a whole it’s a lot about that moment of when you turn 19 or 20 and look around and wonder, “’Is this it?”. And I think people often grow up thinking something miraculous is going to happen to them when they get older. But for most people, getting older is something that just happens as you spend day-by-day living. I had a hard time coming to terms with the idea that my life was not just automatically something at a certain age. If I want something I have to work for that. I have to develop my own character, my identity and what I stand for. So I think that’s where a lot of that record comes from. 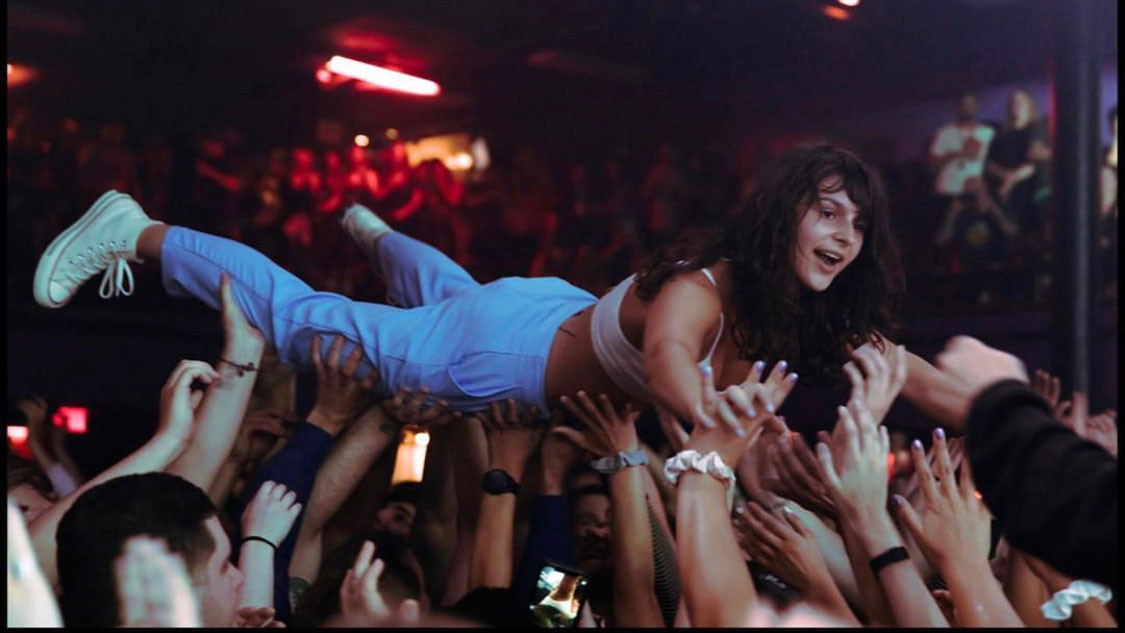 Sartino crowd surfs during a recent performance. Sartino said she had an unfortunate incident while crowd surfing during the band's show last week in Los Angeles, which has motivated her to take active steps to promote crowd safety at the band's shows going forward. | Photo: Aubrey Dennis

You were the unfortunate recipient of disgusting, unwanted touching while crowd surfing during a show in Los Angeles last week and you’ve been very vocal about how that matter was handled. Have you seen that kind of behavior a lot on your tour?

No, and it broke my heart because I had been so proud of our audiences that something like that had never happened. The sadly ironic thing is that 10 minutes before that happened, I asked everyone in the crowd if they felt safe and told them if they don’t feel safe, please let us or security know and we’ll change that. But it’s really lit a fire in me about concert safety.

I think it’s so important for everyone to feel 100-percent comfortable to be at the show. And people try to tell me that you can’t kick out everyone who is being creepy. But I absolutely can and I will. Any show that The Greeting Committee is playing will be a show where our top priority is to make sure everyone feels safe. Because if you don’t feel safe, you can’t have fun. And people pay their hard-earned money to come to our shows and have fun.

How do you envision that working in a concert setting with so many people in the audience?

One thing that I’ve been thinking about is some sort of text line. So many men or women who are harassed don’t feel like they have the ability or right to call the aggressor out, or they’re afraid to make a scene. I’d like for everyone to feel empowered, so I was thinking a text line that links up to one of our crew members or to the venue security team. That way the audience member doesn’t have to leave their spot and they can have some level of support.

I’m past the warning game. After it happened at our show, I talked about it a lot from the stage. And if I hadn’t, I would have basically been telling that guy that what he did was OK and it’s not.

This weekend’s Boulevardia slot will cap off a pretty impressive nationwide tour for the band. Is there anything in particular you’re looking forward to?

I’m really excited to be home for the sake of being home, but Boulevardia is so special. It brings a lot of really great people together. And the lineup this year is full of so many wonderful local acts that deserve that spotlight. I’m going to try my best to see all of them. But Kansas City feels like a family so when you play a hometown show, it’s a room full of those people you love so much, who have stuck by you since the beginning. And with Boulevardia, after you play the show, you get to be a part of it.

And I’m 21 now, so I can go and legally drink the Boulevardia beer, so that’ll be exciting.

The Greeting Committee’s debut full-length, “This Is It,” was released in October 2018. The band will end its nationwide tour with a festival slot on Saturday June 15 at 5:50 p.m. on Boulevardia’s Main Stage.

Nick Siegel — ‘Get In the Car’ Exclusive Video Premiere