Antonio Marquez of Kansas City is one of the most commanding frontmen in modern hardcore music — a noisy and defiant splinter genre from the traditional sound of punk rock.

His band Spine just released its latest album on Boston-based Bridge Nine Records — one of the most cherished labels among fans of hardcore. Antonio’s brother, Julian, is a breakout fighter in the now-mainstream sport of mixed martial arts and quite literally kicked open the door to an Ultimate Fighting Championship contract in 2017.

“We were pretty much the better halves of each other,” Julian said about his older brother, Antonio, in a recent interview. “What he was good at, I wasn’t good at, and what I was good at, he wasn’t … Like beating a [video] game. He would give me the controller, and I would beat the part he spent hours on. And when I needed help with homework or a situation, I’d ask him, and he could solve it in a quick second.”

But before any of this could happen, and before the Marquez family created two of Kansas City’s most notable Cuban Americans, a few things had to happen first.

Fernando Marquez, their father, fled Cuba with his parents during the 1960s as the revolutionary communist regime of Fidel Castro rose to power, and the United States subsequently launched what became decades of crippling economic sanctions against the tiny Caribbean island.

The Marquez family had to then enter a shaky global refugee and immigration system that eventually landed Fernando’s mother in Miami and his father in Spain before the three were finally reunited in West New York, New Jersey. That’s where the Marquez family planted their first roots in America.

A young Fernando, before he became father to Antonio and Julian, spent his own formative years on the East Coast becoming exposed to American music and art counterculture and discovering hip hop, metal and punk music with new friends. He joined a breakdancing crew called the Black Knights.

Eventually, however, Fernando’s father was transferred from a Ford auto manufacturing plant in New Jersey to another in Claycomo, Missouri, northeast of Kansas City. The Bi-City area would now become a familiar and defining geography for the Marquez family that continues today.

As Fernando became a young man, he met his wife-to-be in Kansas City, Shannon. They had Antonio first in 1988, and Julian arrived two years later. The two brothers were competitive from the start but did virtually everything together.

When the Marquez brothers weren’t taking on homework and video games, one of their shared activities as teens and young adults was hardcore music. Antonio had stumbled upon his father’s music collection as a kid, and along with plenty of early hip-hop and metal albums sat some classic New York hardcore bands, a region of the country that played a major role in the genre’s influence.

Antonio says he was bewildered that his father would own records with skinheads on the cover — Agnostic Front’s “Cause For Alarm” — and one titled “Speak English Or Die” — the Stormtroopers Of Death debut. He didn’t return to them for a while. At the time, pre-Internet, underground bands were often intentionally abrasive wherever possible, and their lyrics offended everyone possible.

“Oh, you don’t get it,” Antonio’s father told him at the time.

Eventually though, Antonio’s interest in heavy, louder music led him back to hardcore bands that his father had once shown to him.

Bands like Every Time I Die and Eighteen Visions played at the historic El Torreon building where Antonio got his first taste of Kansas City’s hardcore scene. He recalls catching sets from mid-2000s favorites like Crap Corps, Eyes Of The Betrayer and Pixel Panda.

The local hardcore band Coalesce had by then helped draw international attention to Kansas City from fans of independent, underground music, as had the label Second Nature Recordings, founded by Dan Askew, who today runs Escapist Skateboarding in town.

Guitarist Alex Tunks letting riffs fly at the tour kickoff. Tunks was responsible for recording much of Spine's early output, as well as tapes and records for numerous other Kansas City rock bands. | Photo: Aaron Rhodes

The friends Antonio made at these shows and on online music message boards together began to form their own bands, and in 2008, Antonio’s first, Sorry Excuse, was born. The band, which played and performed until 2012, was one of just a few in Kansas City at the time that embraced “straight edge,” or abstinence from drugs and alcohol.

They made alliances with other regional hardcore bands, and a loose collective formed known as the Midwest Wolfpack.

Most of the Wolfpack’s bands have since dissolved, but their members remain in touch and occasionally play together in new groups. Less than a year after Sorry Excuse ended came the dawn of Spine, a collaboration of veteran members of both Kansas City and Chicago’s hardcore scenes.

“In order for it to even get off the ground, I had to accept that it’d just be a project,” Antonio says of Spine’s beginning. “[John Hoffman, drummer] was [busy] with Weekend Nachos and [Jon Hofacker, founding guitarist] had just come off being in Harms Way.”

But after the release of their first demo and a successful inaugural show, it became clear that Spine might be more than just a long-distance recording project.

Until more recently, Spine had kept things fairly DIY. All of their records had been self-released through Hoffman’s Bad Teeth Recordings, and several East and West Coast tours were booked by the band alone.

Spine’s potent blend of pissed-off powerviolence and punchy youth-crew hardcore helped them cultivate a regional following of fans who will drive hours to see them — these friends and fans make up the Spine Crew. 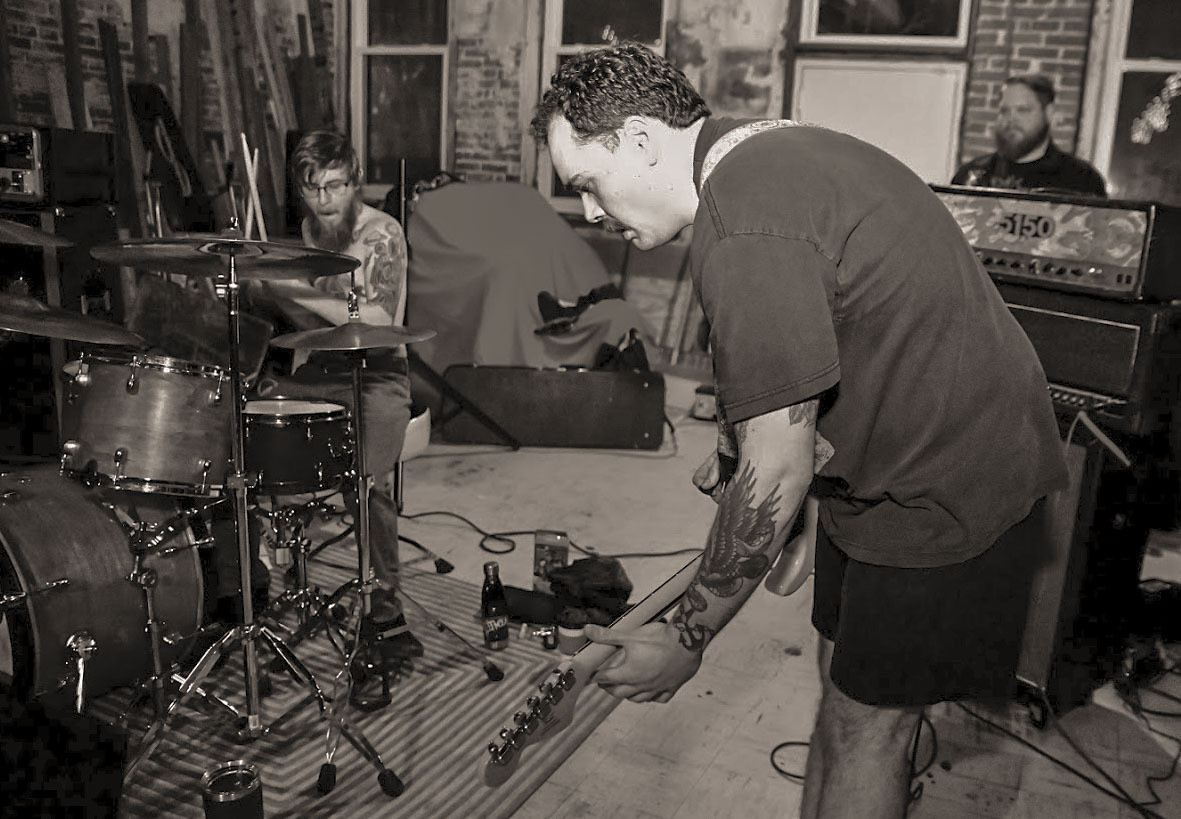 Drummer Dillon Bendetti and guitarist Alex Tunks on a tear, mid-Spine set in the back room at Sister Anne's. | Photo: Aaron Rhodes

After independently releasing three cassette tapes, three seven-inch records and an LP, Hoffman decided he didn’t want to release their next album by himself. The crew was also curious about what kind of production and marketing options could be available to them, so they recorded some new demos and sent them out to labels.

Antonio says that Bridge Nine Records was the first label they asked, and the response was enthusiastic. Their Bridge Nine debut, “Faith,” contains the same aggressive hardcore hybrid as most of the band’s past material. But the Bridge Nine debut arrived with higher-end production courtesy of Chicago’s Andy Nelson, which gives Spine’s signature sound a whole new life.

Antonio’s dark and misanthropic songwriting is more focused than ever on the record.

“When you listen to the music and you read the lyrics, [the album is] sort of like a timeline,” Antonio says. “The timeline ultimately ends with the last song, ‘Faith,’ which is me basically being like, ‘I have no faith in anything, fuck this world and everything that goes on in it…’”

Themes of grief and life’s endless barrage of painful change rear their heads several times on the record. But one experience that inspired intense rage for Antonio was a 2013 trip to Cuba. He visited a supermarket there and experienced unforgettable culture shock. The store was open only to American visitors and, according to a cousin, was selling products that had been sent over as aid for Cuban citizens, many of whom remain starving. Antonio was stunned by the experience.

“I think I came out of it even more bitter than I was beforehand, because it just pisses me off,” he said, “Especially when I see people talk about things that go on in Cuba, and they make it political in the landscape of right-wing ideas or left-wing ideas or centrist ideas. [It] has nothing to do with any of that shit. It’s very simple — right things and wrong things.”

But new experiences with his brother, Julian, have proved uplifting. After he began to settle into the world of marketing — which Antonio also works in — Julian was encouraged by a friend to pick up fighting again, after some experience with it in his adolescence. The family had loved watching boxing and mixed martial arts together. Julian dove into what became years of training, all while keeping multiple day jobs.

After a handful of professional fights, Julian found himself, in August 2017, competing in a Contender Series bout organized by UFC president Dana White. As the Marquez family, White, a packed house and Snoop Dogg — an avid MMA fan — all looked on, Julian defeated his opponent Phil Hawes in the second round with a gruesome kick to the head that left Hawes limp on the floor.

Antonio and his father instantly leapt up onto the cage; UFC honcho White jumped out of his seat in disbelief.

Julian crouched to make certain Hawes was not seriously injured, a display of respect that Julian says is just part of how he and his brother were raised. “It takes two to tango and I pay [my opponents] respect for being able to step in the cage and face me,” Julian said about the experience.

The knockout kick made ESPN’s SportsCenter the next day. Before the week was over, Julian had signed a UFC contract, but he’s chosen to also keep his other job at TopGolf in Las Vegas.“You have to have something that takes you away from the thing you do the most or else it turns into a regular job,” he says.

Continuing their brotherly tradition of teamwork, Julian flew in to Kansas City to be in Spine’s latest music video, and Antonio has officially become Julian’s fight manager. Julian lost his July 6 fight with Alessio Di Chirico and sustained a lat muscle injury that required surgery to fix. He’s been documenting his recovery and training routine since then on his Instagram, still beaming ear to ear in nearly every picture or video.

Whether Antonio is taking on a tough crowd in Spine, or Julian is entering the cage to face down his most rugged opponent, the Marquez brothers of Kansas City know they’ll have each other in their corner.

—Aaron Rhodes is a music journalist based in Kansas City, Missouri. He is the editor-in-chief of Shuttlecock Music Magazine and is a frequent contributor to The Pitch and 90.9 The Bridge.