Up For Something More

The Pedaljets Refocus and Blast through Vast New Expanses

Over three decades after the band’s debut, The Pedaljets’ “Twist the Lens” takes all the fire of that young band, ties together its history and makes stunning leaps forward. The power trio at the core of that story — bassist Matt Kesler, drummer Rob Morrow and lead singer/guitarist Mike Allmayer — have a distinct explosiveness that ignites with note one and relentlessly floors the rhythm until a moment like this album’s climax.

That cut, “Sleepy Girl,” begins with a shimmering arpeggio courtesy of the band’s newest member, Cody Wyoming. Kesler’s bass thoughtfully, deliberately paces, preparing the listener for Allmayer’s story of an early morning encounter with a girl in a convenience store checkout line. Morrow’s drums begin with a rallying snare before expanding the structure of the arrangement, an effect as dramatic as sweeping back curtains on a panorama.

Like thoughts tripping off a tabloid headline, the singer’s refrain turns on what everybody knows — “the king is dead” — before settling on his stubborn refusal, “everybody knows but me.” He’s thinking about the distance between this girl and himself, and the distance between her and the boyfriend at home for whom she may be picking up that second pack of cigarettes. And, somehow, somehow, the song becomes a meditation on compassion and commitment. His final refrain, over Wyoming’s plaintive slide guitar: “It doesn’t matter what I’m waiting for / I’m going to stay up for something more.”

Produced by the band with Shiner’s Paul Malinowski and engineered by John Agnello (who’s worked with everyone from Cyndi Lauper to Sonic Youth and Kurt Vile) and mastered by Greg Calbi (whose work is voluminous but includes “Born to Run,” “Damn the Torpedoes” and “Remain in Light”), “Twist the Lens” is a gem of a record. Touching on everything from personal boundaries to everyday anonymity, creeping stagnation, outright fascism and ultimately — the hope and will to fight — no record has spoken more personally to me about the tough and tender extremities of recent experience. 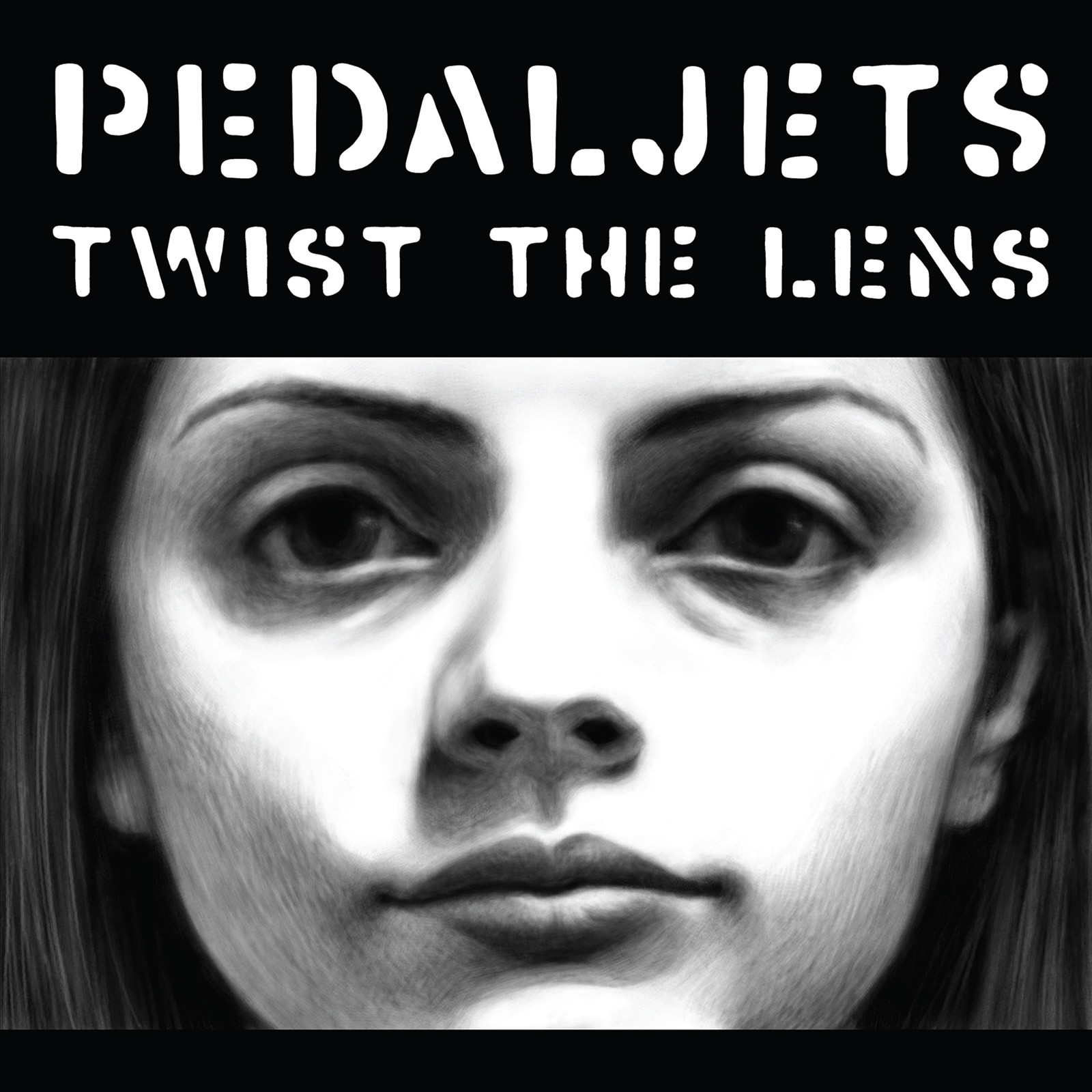 When I sit down with the band and talk about it all, my enthusiasm leads me to some grandiose statement about the record’s meaning.

Kesler leans forward on the couch, looks me in the eye and drawls, “Hey, Mr. Peters, there’s going to be a little mess!”

He is quoting “One Away,” a rocker that begins “When a dark light covers up our world…”

He sits back, finishing the refrain, “You’re going to need a little kiss!”

He’s not arguing with me, and it’s not a joke, but he’s bringing the moment down to size with some needed humor. There’s a kind, good-naturedness to this group that really defines the idea of a band. The tendency is to point out one another’s strengths, whether regarding Wyoming’s contributions or Kesler’s all-around virtuosity or the power of the drums, which finds Morrow stating, “If anyone wants to say that I’m pretty good, it’s my imagination and how I fit in the band… and I can keep time.”

Such modesty explains some of why (despite a nearly two-decade break) this band likes working together, perhaps more than ever. “Seriously,” Kesler says of Allmayer, “Mike has put a lot of work into his singing, into his tone, and it comes across on the record. I think his vocals are stronger than they’ve ever been. When I joined the band, he didn’t have the confidence. I came from a cover band. For me it’s easy to hear something and repeat it, a lot easier than it is to create something. Mike is the other way. It’s easier for him to create something.”

“What he just said is the essence of The Pedaljets,” Morrow adds. “When I was first invited to jam with these guys, it was like ‘This is what I want – to do something original.’”

“Same,” chimes in Wyoming. “Right from that first practice, I remember working on ‘Twist the Lens,’ and I was like, ‘I don’t have any idea how to play this stuff.’ Mike uses these very unconventional chord voicings.”

Kesler sits forward again, strumming an invisible guitar. “When I first started playing with Mike, I was like, ‘Dude, you can’t do an E and an F chord, and he was like, ‘Yeah, you can, here it is!’ ‘There it is!’ ‘Bump, Bamp.’ I was like ‘alright, alright, I guess you can!”

Morrow laughs. “I guess YOU can!”

Wyoming recalls how he was thrown into this mix for a trip to Austin, Texas, in January 2014. Malinowski had played with the reconstituted band, but was becoming less available. Though Wyoming had just formed his own band, The Philistines, he was a huge fan of 2013’s “What’s In Between” LP and studied the songs to fill in. He had been close with The Pedaljets for some time, acting as band leader for two shows by Kesler’s longtime friend Alejandro Escovedo, first on Kesler’s birthday (11/11/11) and a couple of years later. Wyoming was a full member of the band by SXSW 2014.

Still, Wyoming recalls having to adjust to The Pedaljets’ approach. “In the Philistines, I kind of write everything. I let people play their own lines and have their own interpretation, but there is also an element of it goes exactly like this,” he says. “And Mike allows The Pedaljets to take part in the arrangements. All the melody, the rhythm, the lyrics, the chords, all those kinds of things are finished, but the band has a lot of input into how all the cumulative parts work together, and I had to learn my place in that.”

“It was an easy transition,” Morrow says. Kesler adds that Allmayer is an encyclopedia.

“Matt will listen to Mike,” Wyoming continues, “and he just knows how to play with him. Mike, as a guitarist, takes up a lot of sonic real estate. There’s a broad spectrum of sound that he covers, and so I’ve got to be sneaky about where I play ‘cause I don’t want to just play on top of him, and I don’t want to just do what he’s doing. But the music Mike writes now would be underserved with one guitar.”

Wyoming pulls out his phone and shows me a video of a bathroom urinal with a wire and something black taped into it. Strange guitar sounds are coming out of the phone. “This is [side one closer] ‘Transfer Is Done.’ I put an $800 microphone on a $20 amplifier and stuck it in a toilet.”

Allmayer smiles at this. “No one felt like they couldn’t try something,” he said.

Morrow says, “I got on my hands and knees and was doing like a wall vent with a drumstick.”

“We wanted timpani on one song; we downtuned a floor tom and didn’t have a mallet, so we wrapped a drumstick in toilet paper to get that ‘bom bom’ sound,” Wyoming adds.

Allmayer laughs, mentioning that Kesler changed the lyrics. “It’s on ‘The Fader,’” the bassist responds. “Mike’s line was ‘eating pie at 3 a.m., and I thought it was ‘the empire at 3 a.m.’”

“We all looked at each other and said, ‘yeah!’,” Morrow adds, so Allmayer changed it. “Yeah, it’s better,” Allmayer concludes.

The evening soon turns to playing new tracks the band cut but didn’t put on the record. One is a hard, angular rocker that leads to a mention of the Gang of Four’s recently deceased Andy Gill; another draws comparisons to the Rolling Stones; both are pure Pedaljets.

“We can move fast,” Morrow says. “I think we’re all frustrated that there are other songs to get started on for the next one. Towards the end of the session for the new record, we needed a couple of extra songs so we just knocked those out, then we all looked at each other and said ‘let’s do this more.’”

“We’re definitely going to make the time gap a little bit shorter,” Allmayer laughs, projecting a few years out, “‘The Pedaljets have been together for 40 years and they have 4 records!’”

“What’s cool about ‘Twist the Lens’ is that the band has figured out how to use all of the things it does best,” Wyoming concludes. “The fact that ‘Sleepy Girl’ and ‘This is Sepsis’ sit comfortably on the same record is what this band is all about.”

And then there’s the heart thing. When I tell them how much “What Only Cats Chase” reassured me when I heard it, Kesler looks at Allmayer. “We had a big discussion about that song when you introduced it,” Kesler says, “and initially we were talking about your father and my father, the father figures, the people who drive through rain, sleet, snow —”

“That’s the opening,” I add, thinking of those images in the lyric.

Allmayer nods. “That first verse is about my dad.”

“Whatever you gotta do, you do it regardless of whatever the circumstances are,” Kesler continued. “You always maintain and move forward. You do it, you keep going —“

“It’s just what we do,” Morrow says, summing up “Twist the Lens,” and life itself.

The Pedaljets celebrate the release of “Twist the Lens” with a Kansas City show at miniBar this Saturday, Feb. 15, with support from Dan Jones & the Squids. Tickets are available.

— A long-time editor of the national music and politics newsletter, Rock & Rap Confidential, Danny Alexander has been writing about music for various Kansas City–area publications for three decades. He's the author of Putnam Berkley's "Liner Notes: Soul Asylum" and The University of Texas Press's "Real Love No Drama: The Music of Mary J. Blige."