Above image: With social distancing measures in place, independent musicians and the people/places that support them are at risk. | Photo of a sold-out recordBar show by Chris Campbell Photography

Just over a week ago, I was lamenting about being forced to cancel gigs. It’s my lifeblood as an instrumentalist in multiple bands, a live music supporter whose social well-being is defined by the concert calendar, and a radio content manager in the business of celebrating independent and local artists. It was a daunting prospect.

A week later, it’s a devastating one.

The effects of the COVID-19 pandemic are now leaving everyone uncertain about their physical, mental and financial stability. The magnitude of the new virus has become more apparent by the day, starting with some major hits to the arts and entertainment industry — from the shocking cancellations of behemoth music festivals like SXSW and Coachella, to dropped tours from every major artist. And while these cancellations translate into millions of dollars lost in artist, industry and tourism revenue, the immediate toll pales in comparison to those incurred by independent musicians.

In times of crisis, people often turn to entertainment and community for solace, but social distancing measures have made such remedies impossible. For the foreseeable future, you can’t patronize your local club or share in the live music experience the way you’re accustomed.

“If we can't mitigate this quickly, it becomes a nightmare for performing artists,” said Ryan Davis, who raps and plays trombone under the moniker Kadesh Flow. For the third year in a row, Davis was slated to be an official performer at SXSW — an event that has given him valuable opportunities to connect with major labels and licensing representation.

“I had nine pretty ridiculous meetings set up,” he said. Davis was also set to be featured on a couple of showcases with rising alt-country star Early James. “That, in itself, could have turned into some things, so I was distraught when I heard news of the cancellation.”

An essential business model for many working musicians, touring often poses a financial risk even under normal circumstances.

“Touring income is a major part of revenue for our independent business,” said Diego Chi, whose band Making Movies faces a loss for the first half of 2020. “SXSW was the first to go, and then we heard of outbreaks in Panamá that canceled two international festivals. Now Mexico is postponing the Machaca Fest and FIMPRO 2020, a major conference for Latin music that invited us to showcase.”

And the smaller the artist, the bigger the threat — from lost merch sales to gas fare, connecting with fans and artists in other locales, and being unable to find supplementary income.

“The more overarching burden to artists is how their lives are structured around touring,” said Kevin Briody, a member of KC-based touring band Mess and head of independent booking agency Mantra Shows. “Artists give up income from day jobs or lose stability completely because touring can be too demanding of a request for the average employer. Losing these shows has artists wondering what they’ll do to make ends meet.”

But beyond those who tour on a regular basis, the sweeping impact of social isolation burdens the city’s entire arts infrastructure — the venues and their employees, the audio engineers, promoters, talent buyers, booking agents, publicists, production crews, music teachers and nearly anyone who makes a living out of the creative process.

If there is a silver lining, it lies within the ethos of the independent working musician, whose typical work day falls sharply out of the 9 to 5 confines. That day might involve keeping up with show bookings, securing promotion and placement of new music, organizing bandmates, recording, networking, rehearsing, giving lessons, working other jobs, not to mention the time it takes to create and get ready for performances. Naturally, many of these diligent creatives are brainstorming ways to support themselves and others in the community.

“I actually enjoy the challenge of trying to figure out different ways of generating income as a musician,” said Jessica Paige, a singer-songwriter who has been prepping for a summer album release and tour that now remains in question. “I’m thinking about group lessons online, where people could pay a small fee and join in. I could work on streaming performances for tips, but that comes with a slew of challenges and can’t be done enough to replace the income of live gigs. It’s going to be a struggle to figure out what path is going to be best for my audience and me.” 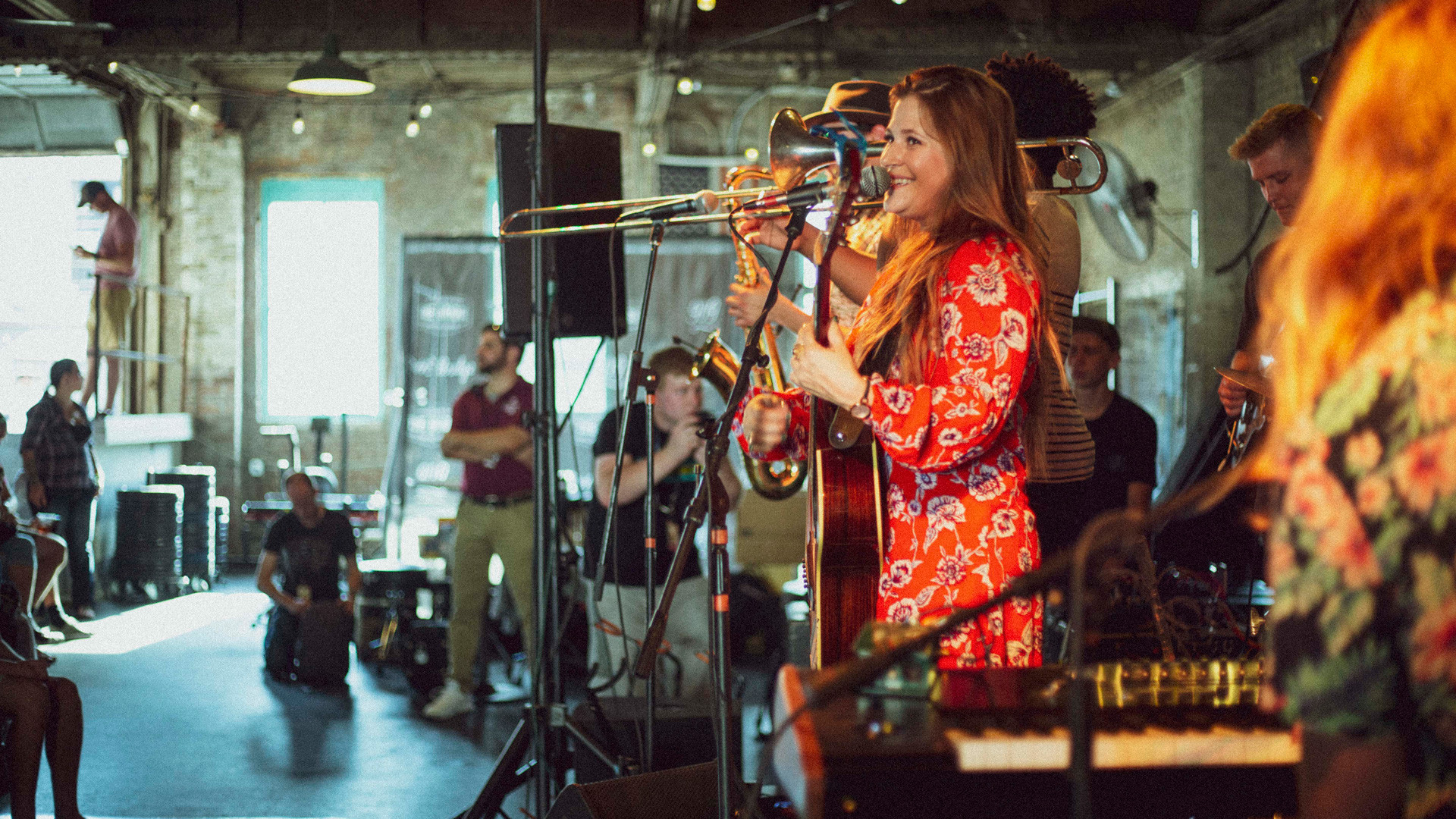 Through online platforms, music venues and the acts themselves, artists are setting up live streams to generate income. Venues like recordBar and Knuckleheads are closed to the public this Friday, but hosting artists like Various Blonde and Danielle Nicole, respectively, and charging a cover. The money will directly benefit both the artist and venue. Musician Laurel Morgan Parks — a member of Of Tree and The Wires, and leader of the Drunken Fiddles group class — is launching The Quarantine Concerts, a live-streaming platform she's been researching for months.

"The goal is to get musicians working again on an online platform," she said. "In the last year I've been working to scale Drunken Fiddles to the online world, so it felt natural to take this on with KC musicians. Right now I have a venue, a sound guy, ideas to make it interactive for the people watching at home, plus an option for musicians to record without having to leave the house.” (Listen to Parks' interview with Bryan Truta)

Today, the possibility of musicians having to abandon their careers in favor of economic survival is a legitimate concern, and the onus lies on those of us who support and appreciate their craft. If you’ve ever attended a concert, enjoyed an acoustic set at your favorite restaurant, heard a band you liked at a sporting event, or discovered an independent artist on this station, consider the following:

For touring artists, selling merch might be the only thing that gets them to the next gig. At this moment, their online stores may be a primary source of income. "I can't stress how much merch matters for an artist's survival," Briody said. "Especially soft goods like t-shirts," which typically yield a larger return than CDs or vinyl records.

Both Midwest Music Foundation and the Kansas City Blues Society have shifted their focus to music professionals whose employment or health are compromised by the coronavirus. A donation to these nonprofit organizations will help connect these professionals — many of whom are uninsured or underinsured — to essential services and vital compensation.

Whether it’s by purchasing a gift card, a t-shirt, a membership or tickets to a concert later in the year, allowing more revenue to trickle into venues right now may save that space from shutting down permanently.

The U.S. Senate passed the coronavirus relief package earlier this week, but it does not apply to certain workers. Because of the nature of their jobs, music professionals are usually independent contractors who are not entitled to paid leave or adequate health insurance. Several initiatives and petitions are available online to urge government representatives to extend this relief to displaced entertainment workers.

“The big thing we can do as artists is be enterprising with what we do online,” Davis said. He has an active presence on Patreon, a subscription-based site that provides members with exclusive content while giving the artist an additional revenue stream and the incentive to create with consistency. Platforms like Bandcamp and SoundCloud allow fans to contribute more money to artists than major streaming platforms, which often pay out a meager fraction of royalties. Bandcamp also announced that it would forfeit its share of sales this Friday, March 20, in an effort to support musicians directly.

“I’ve had well-off fans give me $50 and $100 for one CD, throw $250 toward a music video, etc. People are down to support if artists give them something to work with,” Davis said. “That’s a step a lot of us may need to take in the immediate future. It’ll certainly require a lot of pride swallowing… but this isn’t really a time for pride.”