Now playing: I Got A Girl Tripping Daisy
909 News

The Tonganoxie 'Oh My God' Experience

Above image: Kevin Morby performs at the Myers Hotel Bar in Tonganoxie ahead of the release of 'Oh My God.' | All photos by Aaron Rhodes

Spend a minute scrolling through the Instagram feed of your average millennial. Before that minute is up, you will likely have come across a post or two peddling a grand, new experience. Spend big bucks or submit to an eternity of FOMO! Music fans across the Midwest have envied those with the privilege of witnessing Beychella or chuckled along at one [or maybe both of] the Fyre Fest documentaries, while knowing in the back of their heads that they may have been swindled, too, if they had the means. I’m no expert on biology or human nature, but it seems natural to want to be present for special moments like those, whether they end up panning out or not.

Any punk rocker can tell you that a weeknight gig at their town’s beloved, semi-legal DIY spot is capable of being far more special than some overpriced spectacle adjacent to a wealthy tourist destination. Being of humble Midwestern stock and punk rock roots, Kevin Morby billed his evening in Tonganoxie, Kansas on April 13 simply as a short film screening and solo performance, but rest assured that there was plenty to be experienced.

The first part of the experience was getting there — it’s about the journey, right? My brief trek from Lawrence up US-40 presented me with a series of saloons, motels, gas stations and farms I’d never laid eyes on before. Tonganoxie’s small downtown was mostly emptied out by the time I cruised through it, but its charming storefronts and affinity for painted murals made me a fan by the time I arrived at the Myers Hotel Bar.

I was among the first attendees to arrive for the show that night. The small, disinterested group of townies (or perhaps travelers) surrounding the fire out back was soon replaced by hip city folks dressed in Prairie Chic Lite and outrageous amounts of denim. After an hour or so of ordering drinks, conversing and milling about between the bar’s cozy sitting rooms, patrons filed into a spacious den, which had been outfitted with a projector and a short riser for Morby to perform on. Behind Morby was a bright blue credenza upon which sat a small Orange amplifier, a couple large rock crystals, and an array of candles that he lit before beginning. 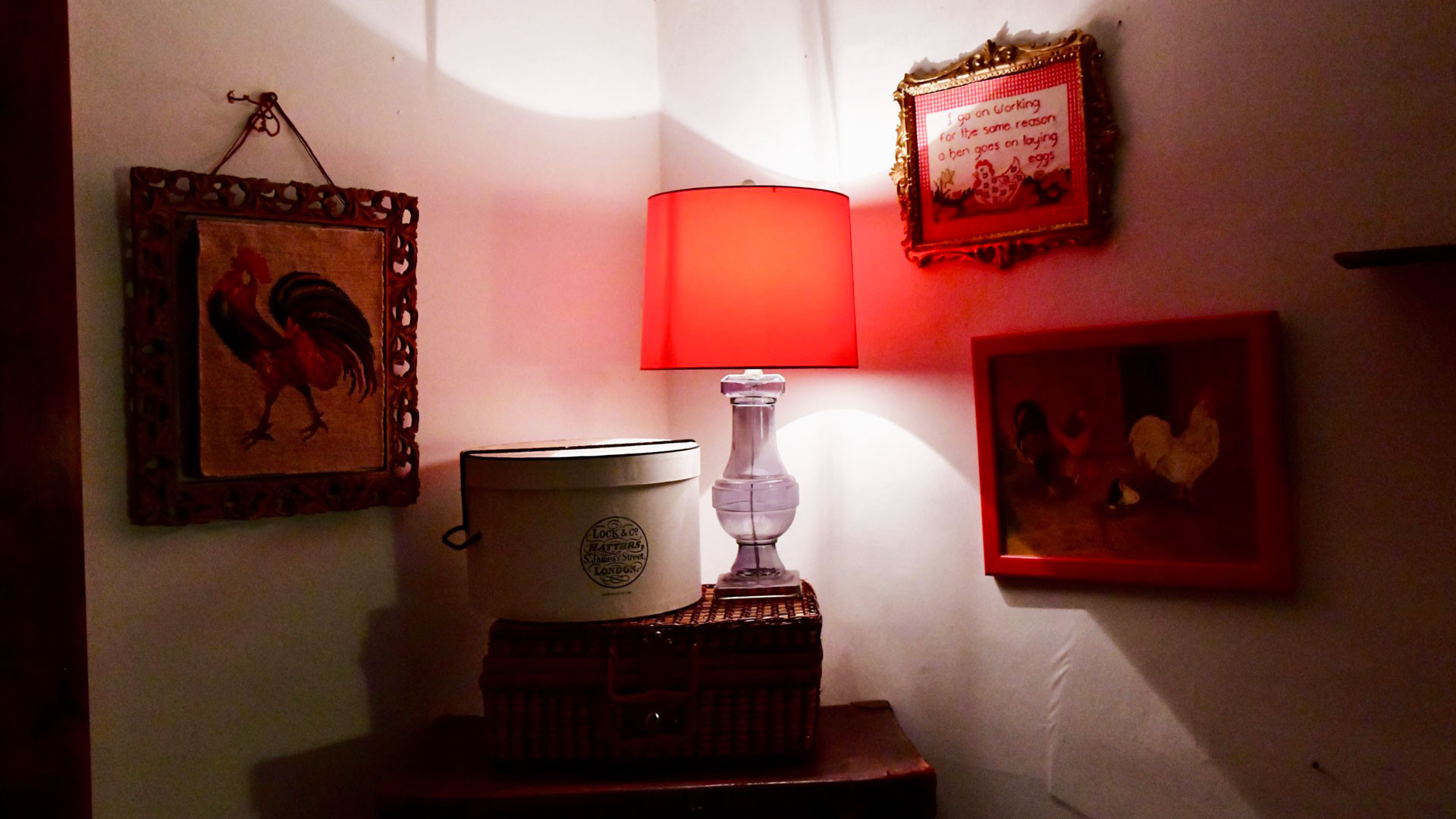 Morby didn’t ramble much in his introduction. He thanked everyone and gave a few quick shoutouts to those involved in the making of the film and album (director Christopher Good and several cast and crew members were present), and those who set up the night’s festivities. He declared that this night was “way more special” than the Los Angeles edition earlier that month.

Gripping his jazz guitar, Morby spent the next 20 minutes or so performing songs from “Oh My God.” Anyone paying any mind to the album’s rollout was aware of how ambitious an endeavor it had been. It was for this reason, solid as these new songs were and sincere as Morby’s performance was, that the moment where all of the stray ideas in the songs and previously released music videos “clicked” did not come. There were clear religious themes at play, and a pondering of love and mortality, friendships and travels, but a theme tying them all together was not yet apparent. Perhaps that would come with the film, though.

Following the performance, the approximately 100 fans present sat down on the room’s floor as the projector screen was pulled down and the video began. As Morby briefly mentioned after the credits rolled, he and Good had originally set out to create three music videos for the album, but quickly found themselves including a sizable chunk of the record’s 14 songs in the film.

Knowing that, it’s clear how the project became so expansive. Morby had built his own little world where religion — namely the phrasing and attitudes of Midwestern protestantism — was the common language. Over its half-hour runtime, Morby explored this world in a series of dreamlike scenes — wandering in and out of an airplane cabin, a diner, his own home, a cardboard car prop and a movie theater. He engaged with a waitress on the subject of halos, listened intently to the holy rantings of a disgruntled radio show caller, and performed some powerful, gospel-indebted folk and rock tunes along the way. 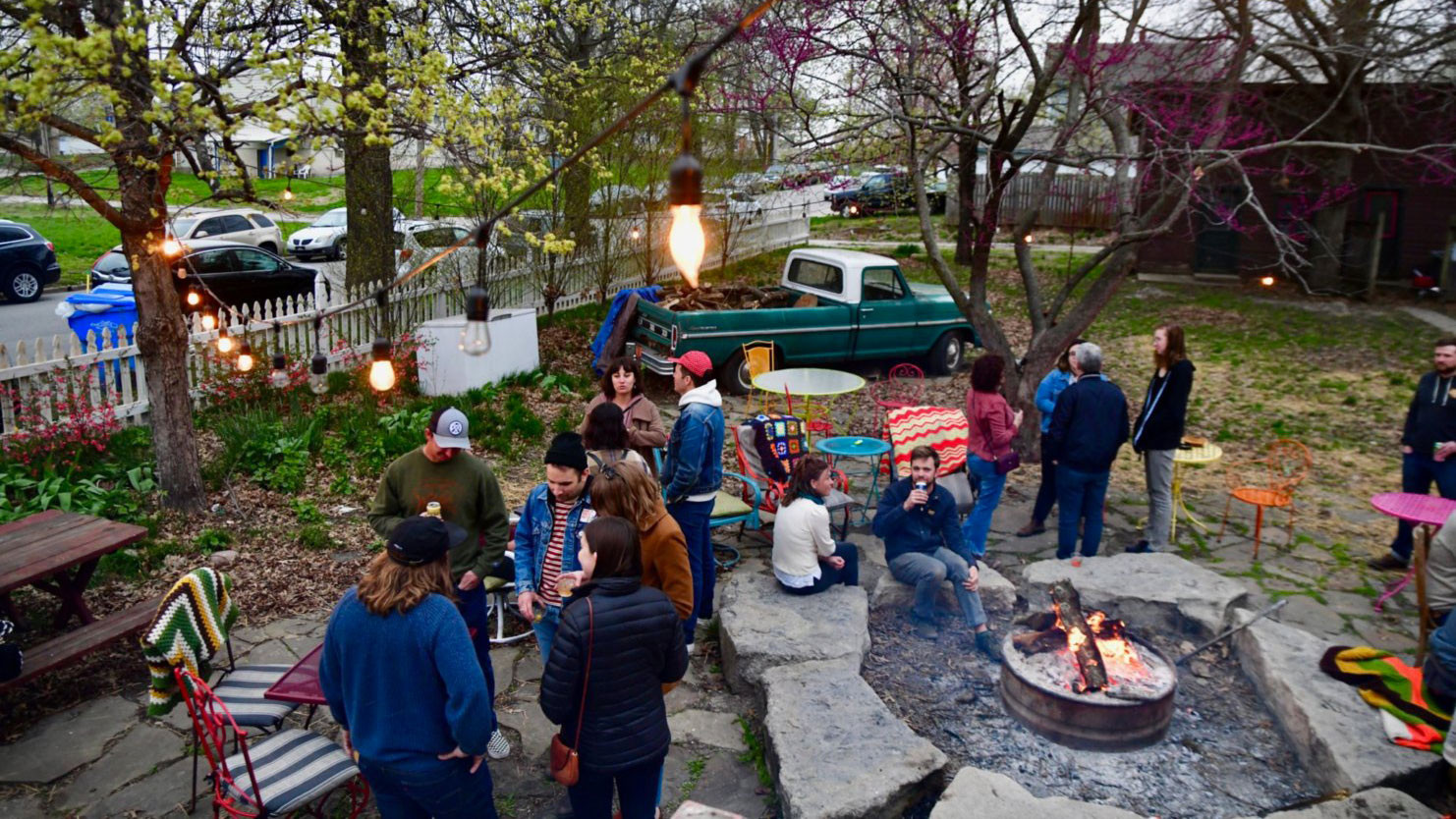 It was fun seeing cameos from other local musicians like Calvin Arsenia, who played a harp in the movie theater lobby, and Shy Boys, who backed up Morby in the on-screen performance of “OMG Rock N Roll.” Morby’s parents (also in attendance this night) even appeared as slumbering moviegoers. The low-budget, yet entirely surreal cinematic universe and series of aesthetics that Good, Morby and their collaborators had crafted throughout the film were also impressive in their own right. Was everything well made, visually and sonically pleasing? Certainly. Did I fully understand the project’s themes after one viewing? Hell no.

The room gave Morby and the crew a rousing applause before filing out to grab a final drink and be on their way. It was announced that there would be a second screening of the film two hours later. My stomach growled. I was informed that my best option would be the Casey’s General Store down the street.

I will contend that the half-stale doughnut and relatively bland (apologies to the Casey’s brand, I’m usually a fan) slice of pizza I ate in my car while gazing up at the horse-drawn wagon mural downtown was part of the full Tonganoxie ”Oh My God” experience.

I returned to the Myers with still 45 minutes to spare before the second screening. I fired up my iPhone and reread recent articles where Morby had dispensed quotes about the album’s use of religious imagery and how it was his first full-on concept album, but failed to find the enlightenment I was seeking.

The second screening was attended by less than a dozen people scattered through the dark room. Morby himself departed just before it began. One man laid flat on his back and may or may not have fallen asleep before its end. With this viewing, the iconic, minimalist vision that fueled the project became clearer and the songs quickly began to feel like I had known them far longer than one evening. I now understood much of the language being spoken, but still was not wise to what Morby was trying to say with it.

I left Tonganoxie that evening somewhat unsatisfied, yet happy knowing how strange and unique an outing it had been.

A few days prior to the album’s April 26 release, I was given my first full listen of the album. That’s when it clicked. His first and third records, “Harlem River” and “Singing Saw,” saw Morby embracing folk music and rural imagery, while the second and fourth, “Still Life” and “City Music,” dealt more in rock and roll and life in the big city. I came to understand how fully Morby, on “Oh My God,” had interwoven the avant-garde and traditional songwriting styles he had previously mastered, mostly separate from one another, and the soft-loud spectrum of guitar music, from folk to rock.

Thanks to a few more interviews that surfaced by the release date, I also learned of Morby’s fascination with creating “sonic pop-art” and the inspiration he found in the work of Keith Haring and Andy Warhol — the Velvet Underground vibes on some of these songs make a whole lot of sense. By fusing together media old and new, compositional techniques complex and simple, Morby had inarguably created the pop art he set out to make. The album’s cover art mirrors this approach perfectly, featuring a photograph portrait by Barrett Emke of Morby in his bed (a place he considers “sacred” due to the dreaming and lovemaking that occur there), overlaid with the album title in a bold, sans serif font.

Morby’s claims of the album being his most “realized” work to date also ring true. It feels as if no other American songwriter could marry the rural charm of growing up in Kansas (and seeing all sorts of similar, peculiar locales on tour) and the high-art curiosity of metropolises like New York and Los Angeles (he spent years living in each) in this same fashion. Morby has created a secular, humanist hymnal that preaches the importance of cherishing each day in life in all its weirdness and taking care of those around you, despite the inescapable chaos of modern times. The next time you involuntarily utter the phrase, “oh my god,” it likely won’t regard anything important, but the holy pop art of “Oh My God” will quietly urge you — a pious urbanite? A nontheist farm boy? — to reconnect with the childlike wonder you may have lost touch with.

—Aaron Rhodes is a music journalist based in Kansas City, Missouri. He is the editor-in-chief of Shuttlecock Music Magazine and a frequent contributor to 90.9 The Bridge and The Pitch. Follow him on Twitter and Instagram @IntroFreeMind.

Vampire Weekend Is Looking For The Cool Within The Uncool