Kansas Citians can count on one hand the number of independent music projects that rival the ambition of UN/TUCK. Since its launch in October 2017, the queer and trans electronic collective has released music from two of its three founding members and thrown a multitude of unique and engaging shows in various clubs, warehouses and hole-in-the-wall spots around the city. Most would be content to sit and rest on their laurels, but UN/TUCK is a collective unlike most. Before turning 2, it will have thrown its first two-day music festival.

UN/TUCK co-founder Lorelei Kretsinger, who performs as Floraviolet, came up with the name Transfiguration for a group of songs she’d been working on. Mazzy Mann, another co-founder who performs as MX.MRS, described it as a “new-wave-y kind of idea, transfiguring the past into the future” that perfectly fit their idea for the festival. In January 2018, UN/TUCK paid tribute to electronic composer Wendy Carlos, known best for her iconic film scores and helping develop the Moog synthesizer. According to UN/TUCK co-founder Zoey Shopmaker, who performs as Sister Zo, this show gave the crew a rush of inspiration.

“Transfiguration is really about the intermingling of technology and queerness and the nostalgia for these lost cultures that impact our lives today in very palpable ways,” Shopmaker said. “And those were things that we as a collective were founded on and bonded over.”

Due to the constant marginalization queer and transgender people have faced, the members of UN/TUCK find it important to preserve the legacies of pioneers like Carlos, ensure that their stories aren’t erased and, hopefully, tread new artistic ground themselves.

Mann put together a promotional video for the festival that includes archival clips of iconic gay liberation activists and key figures in the Stonewall Riots, Marsha P. Johnson and Sylvia Rivera. She found it relevant that Johnson and Rivera spoke about the importance of intersectionality in their activism and warned of the white middle class taking ownership of the movement — a critique many have made of the city’s PrideFest over the last several years.

“It is corporatized,” Mann says. “When I first went to Gay Pride 12, 13 years ago it was free, it was grassroots, it was run by local drag queens and that’s just not the case anymore.”

Shopmaker chimed in. “Obviously we want allies to come and celebrate with us, but Pride [should be] about centering those of us who experience the most marginalization and those being the same women who ignited the Stonewall Riots, which were black trans women. All of that [promo] footage was just about keeping that in the forefront of our consciousness and acknowledging where these movements started, and why we’re even able to exist and be marginally free on some level in our present day, because these women fought so hard for our rights.”

PrideFest and Transfiguration take place over the same weekend this year, and despite their critiques of the former’s commercialized nature, they are encouraging people to attend both — even offering a discount at Transfiguration to those who’ve bought tickets for PrideFest.

Following a long and frustrating search for a venue, the festival organizers were ecstatic when Quixotic offered to donate its spacious Crossroads headquarters for the weekend. With the help of audio-visual collective Light + Sound and expert party-throwers Alter, UN/TUCK and its sister collective Intelligent Sound will produce multiple stages and a lounge area for the weekend’s festivities.

Both evenings will be opened with keynote speakers — including Samantha Ruggles, Nyla Foster and Una Nowling — and night one will include a “drag through the decades” extravaganza featuring performances themed around different eras of LGBTQ culture and electronic music. Attendees will be able to catch sets from a variety of local DJs and musicians (including Lava Dreams, The Black Creatures, Lovergurl and a cast of UN/TUCK’s most frequent collaborators) and three featured headliners (California rave heavyweight and nu-metal enthusiast Bored Lord, Rust Belt techno purveyor ADAB, and hometown harpist extraordinaire Calvin Arsenia).

“We’ve had a lot of really wonderful people come out of the woodwork and say ‘I want to help with this,’ and that’s been really beautiful and encouraging,” Shopmaker said. “I’m excited for the city to experience it, because it’s going to be crazy and nothing’s ever been done like it,” she added with an incredulous but knowing smile and laugh.

Transfiguration Music and Arts Pride Festival takes place on Friday, May 31 and Saturday, June 1 at Quixotic (1616 Broadway Blvd). More details are available on the Facebook event, and tickets are available online and at the door.

Note: UN/TUCK co-founder Zoey Shopmaker is a freelance music writer for 90.9 The Bridge and Flatland. 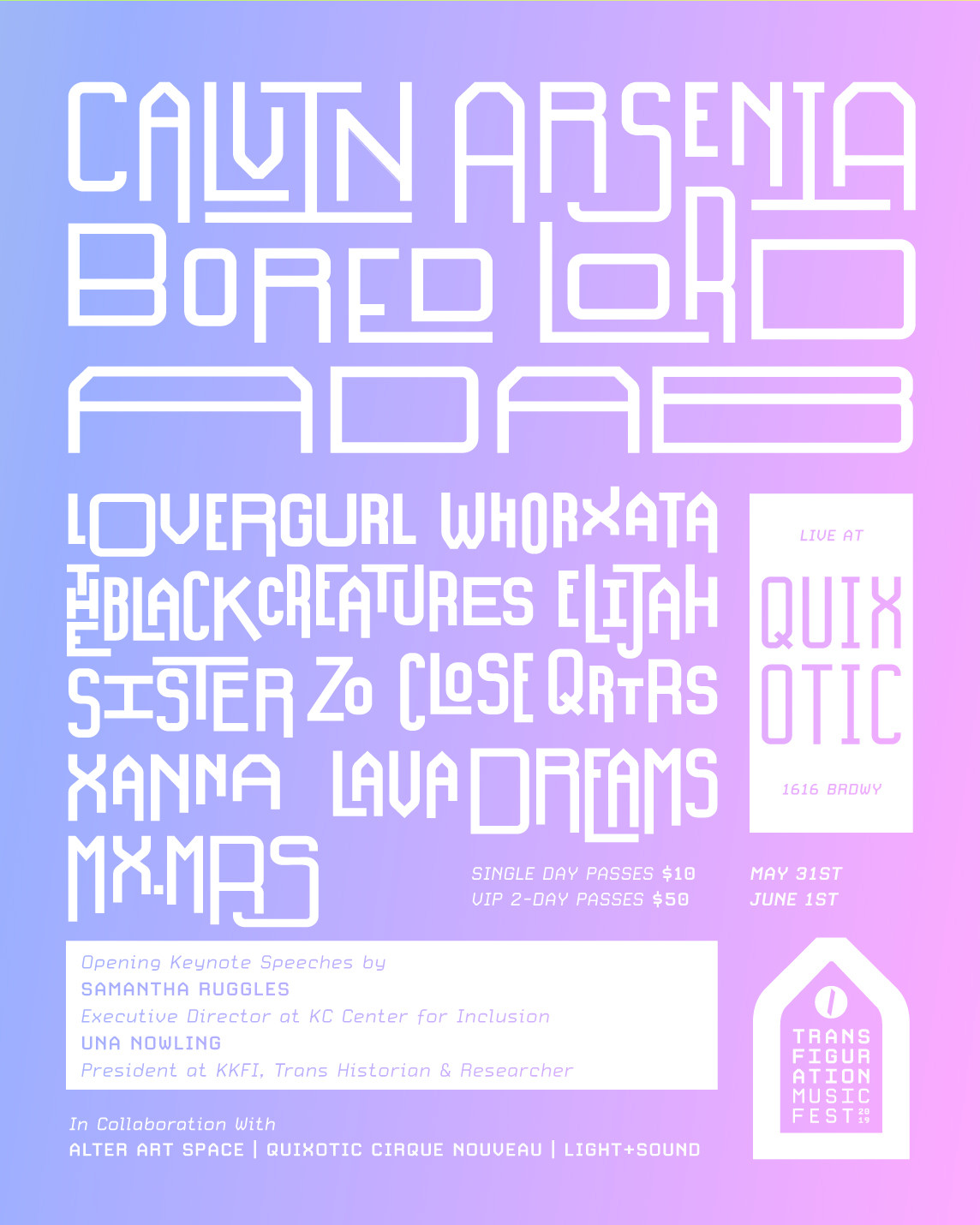 — Aaron Rhodes is a music journalist based in Kansas City, Missouri. He is the editor-in-chief of Shuttlecock Music Magazine and a frequent contributor to 90.9 The Bridge and The Pitch.

In 'We Get By,' Mavis Staples Keeps Singing For 'Change'