Above image: Photo and poster courtesy of John Mulvey

Check Your Expectations at the Door

For several decades, a Bob Dylan show has been a challenge, a blind roll of the dice, even to his most ardent supporters.

The Nobel laureate, who continues to tour relentlessly, is infamous for deconstructing his songs and deforming them into shapes that, if not for the lyrics, would render them unidentifiable. Yet in the face of sometimes brutal criticism, he remains defiant, indifferent, immune to backlash.

After a performance in London’s Hyde Park this summer, a writer for The Guardian called Dylan a consummate artist who “presents his oeuvre not as a back catalogue carved in stone but a kind of living entity, constantly shifting and changing according to his mood.”

Watching Dylan perform live, he wrote, is “as baffling and frustrating an experience as money can buy” because his voice is “a ruined, phlegmy gurgle.”

Dylan will be in town on Sunday for a show at the Arvest Bank Theatre at the Midland, part of the latest leg of his aptly named “Never Ending Tour,” which he launched in June 1988. In April, at a concert in Austria, he celebrated the tour’s 3,000th show.

Sunday’s concert will be his 21st performance in this area. His first was in November 1978, when he brought his “World Tour” to Kemper Arena.  He has since performed in nearly every concert venue here (see list below), often bringing with him fellow legends, like Tom Petty, Willie Nelson, Merle Haggard and Phil Lesh.

After perusing The Kansas City Star archives, it’s evident he has either enchanted and/or bewildered his fans at every show. Here’s a synopsis of his first six local shows, none of which I attended, culled from Star reviews. Headlines are in boldface.

Good second set saves Dylan (1978): “It was both an unforgettable and infuriating show.”

A rocker at heart, a poet in his soul: Dylan bypasses the words’ meter for music’s beat (1986): “The lyrics were usually lost somewhere in multilayered arrangements that emphasized compulsive rhythms, church-choir backup vocals and searing guitar leads.”

Dylan still lives up to his legend (1989): “His vocal phrasing has become even more eccentric.”

Aloof Dylan confuses audience (1991): “Dylan was treated like a god throughout a more than 90-minute concert that was more annoying than entertaining.”

Dylan shows best side at Spirit Fest (1992): “From the start it became clear that he would not deny the tremendous audience…what they had come to hear: recognizable versions of classic songs performed with clarity and enthusiasm.”

He’s still packing a punch: Bob Dylan thrills Lawrence crowd (1994): “Like many of the songs to come, it was easier to recognize from the melody than from Dylan’s eccentric vocals. Then again, Dylan wouldn’t be Dylan without appearing to mumble and even hurry his way through much of his finest poetry.”

My first Dylan show was at Spirit Fest in 1997. He’d suffered a serious health scare in May, just after his 56th birthday, forcing him to cancel a chunk of his tour. He returned to the road in early August; the Spirit Fest show was his 22nd in 29 days, a pace he appeared to be prepared for.

What I remember: He wore a black suit and white cowboy hat and looked and sounded strong. He played plenty of favorites, including a countrified version of “Hey Mr. Tambourine Man” and a souped-up “Leopard Skin Pill-Box Hat.” Of the nine times I’ve seen him, it remains one of my favorites, and not only because it was the first. Also, one of the opening acts was BR5-49, featuring multi-instrumentalist Donnie Herron, a member of Dylan’s band since 2005. 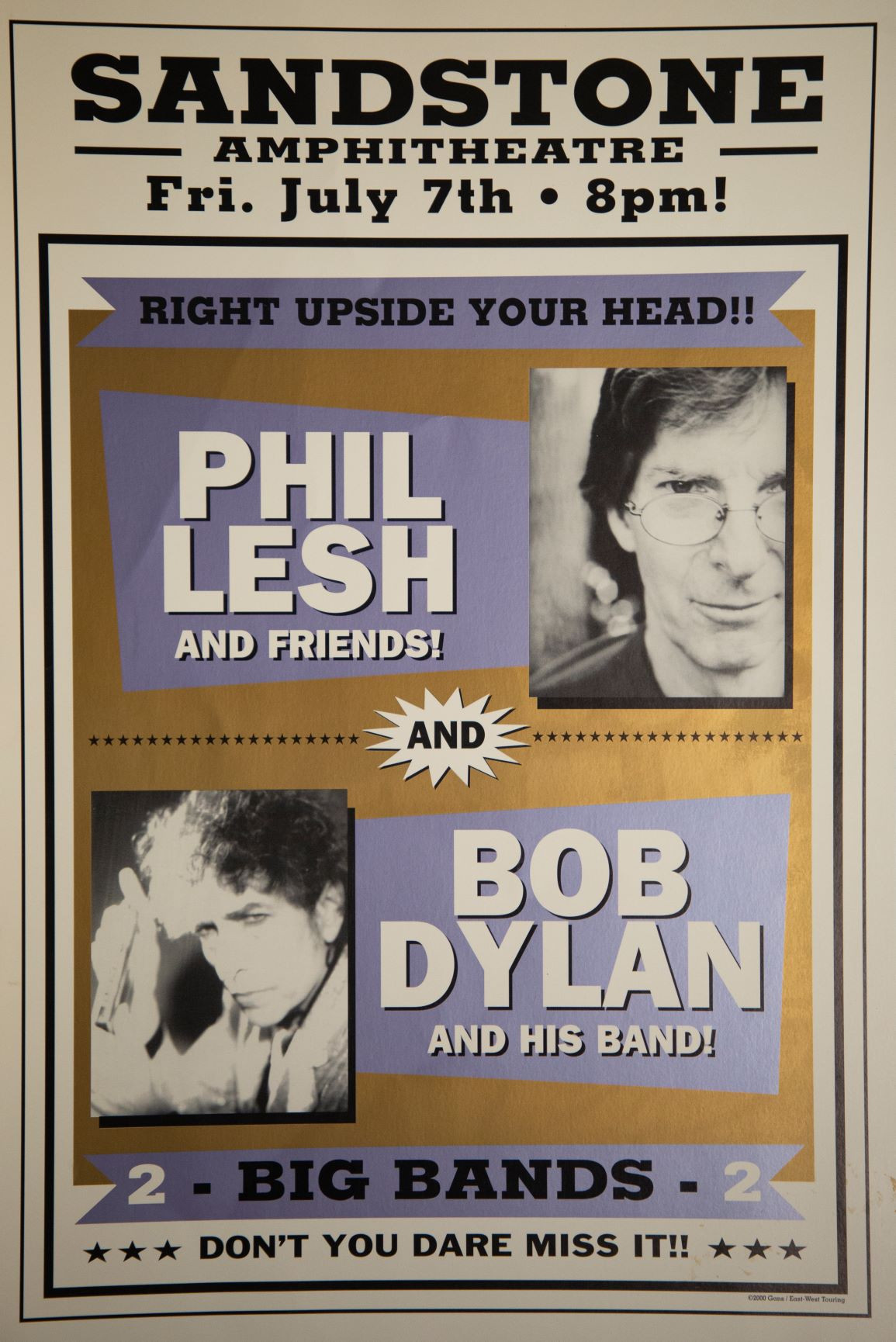 I saw him three years later, July 2000, at what was then called Sandstone Amphitheater. He headlined the show but played early, before Phil Lesh and well before dusk.

It was brutally hot and humid. He and his band were dressed formally in black suits; Dylan’s pants were lined with silver studs and he wore slick black-and-white shoes. They all faced directly into the sun.

Yet they put on a fabulous set, one with a heavy blues/country-blues flavor. He seemed to play to the dancing Deadheads in the crowd, adding a boogie flavor to a few songs, most notably “Tangled Up In Blue.” This was my favorite version of his ever-changing band, which included Larry Campbell and Charlie Sexton. 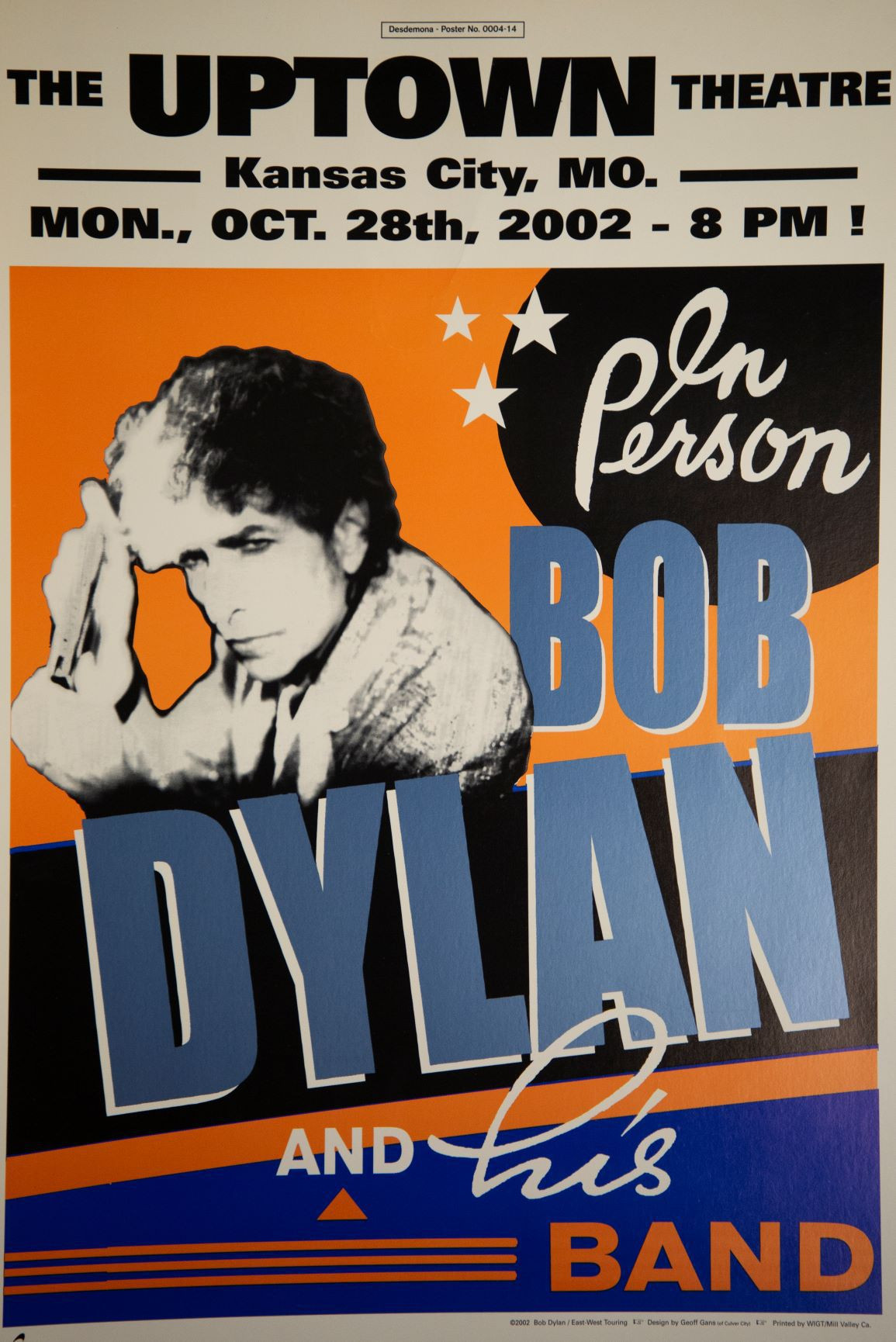 In October 2002, he played his first-ever show at the Uptown Theater and put on my favorite Dylan concert ever.  (After the show, I bought a poster and a T-shirt.) His band, again, was superb, his voice was steady, lyrics and melodies were discernible and the set list was fantastic. It included two Warren Zevon covers—Zevon had just announced that he had terminal cancer—plus Neil Young’s “Old Man” and the Stones’ “Brown Sugar.”

He also dedicated “The Times They Are A-Changing” to Paul Wellstone, a progressive U.S. senator from Dylan’s native Minnesota, who had perished in a plane crash earlier that week. Throughout the set, the Academy Award he’d won that year was perched atop a stack of amps.

As memorable as that show was, the next two were forgettable. The band was different—no more Campbell or Sexton—and his delivery felt intentionally petulant or deranged. 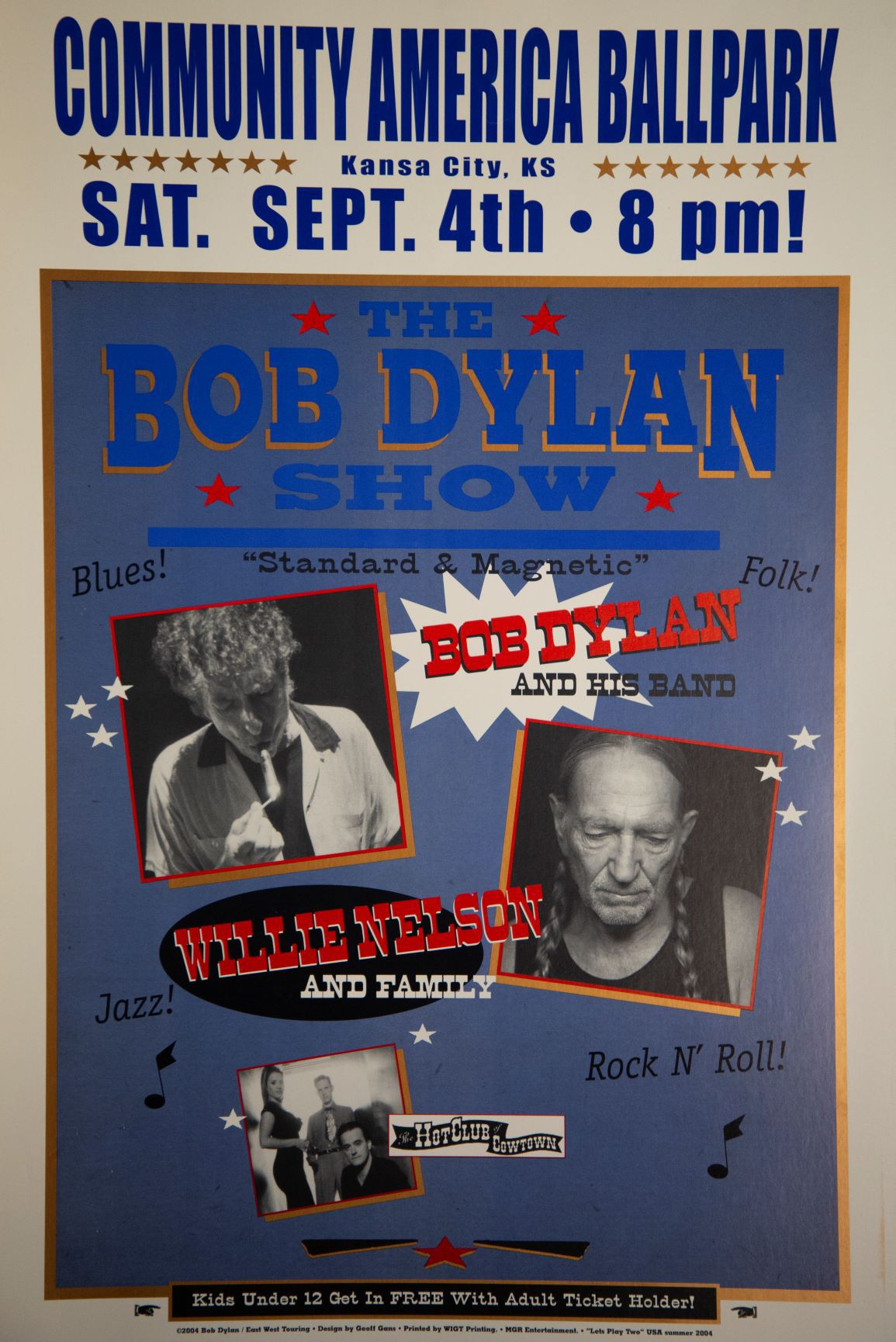 The first of those was at Community America Park in September 2004.  Willie Nelson co-headlined and issued his typical genial, hit-stocked set. He would join Dylan on stage on “Heartland.” Kansas City native Elana Fremerman, of openers Hot Club of Cowtown, would play fiddle on “Tryin’ to Get to Heaven.”

Those two songs were the shows lone highlights. Everything else was a noisy mess. By the time he started the closer, “All Along the Watchtower,” the crowd had thinned considerably. Too many fans could not tolerate the complete dismemberment of his songs, all delivered in a raspy bleat. 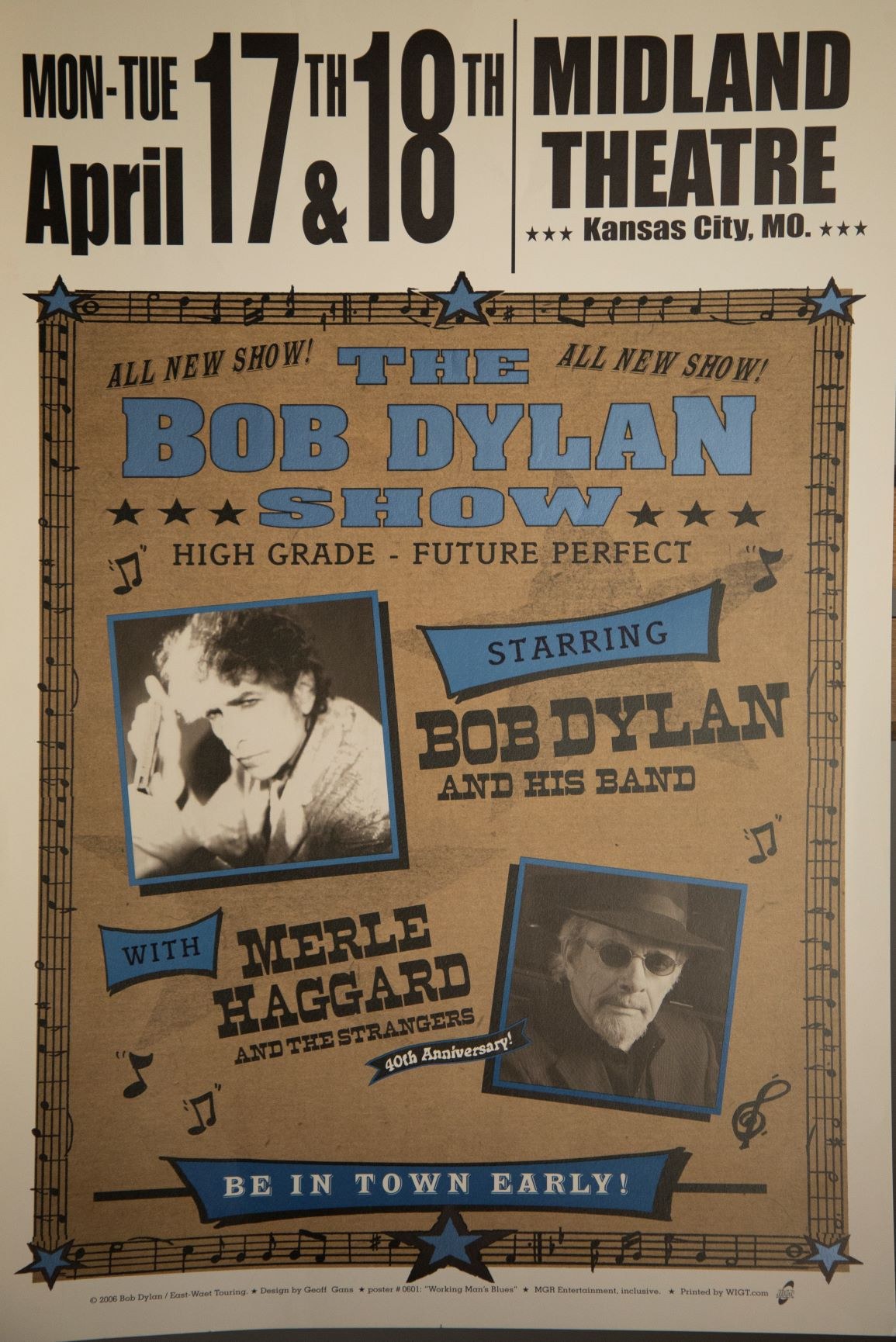 Two years later, he was back for two nights at the Midland. This time, Merle Haggard opened. I attended the first night. Before the show, the couple next to me expressed how excited they were to be seeing him for the first time.  I didn’t have the heart to warn them.

Dylan played keyboards all night, perched far left, staring across the stage, not towards the audience, appearing remote and uninterested, bleating his songs into unrecognizable shapes.

“Is he going to sound like this all night?” the couple asked after the first two songs. “It’ll probably get worse,” I said. It did. They left after about five songs.

I saw him again at the Uptown in August 2008, the night Barack Obama accepted his party’s presidential nomination—a nice concurrence and coincidence.

Dylan, though, did not mention it. Instead he put on an above-average, by-the-numbers performance, one that was somewhat eclipsed by the evening’s historic moment. Before the show's end, more than a hundred fans had left the theater and gathered in its bar to watch Obama’s speech. 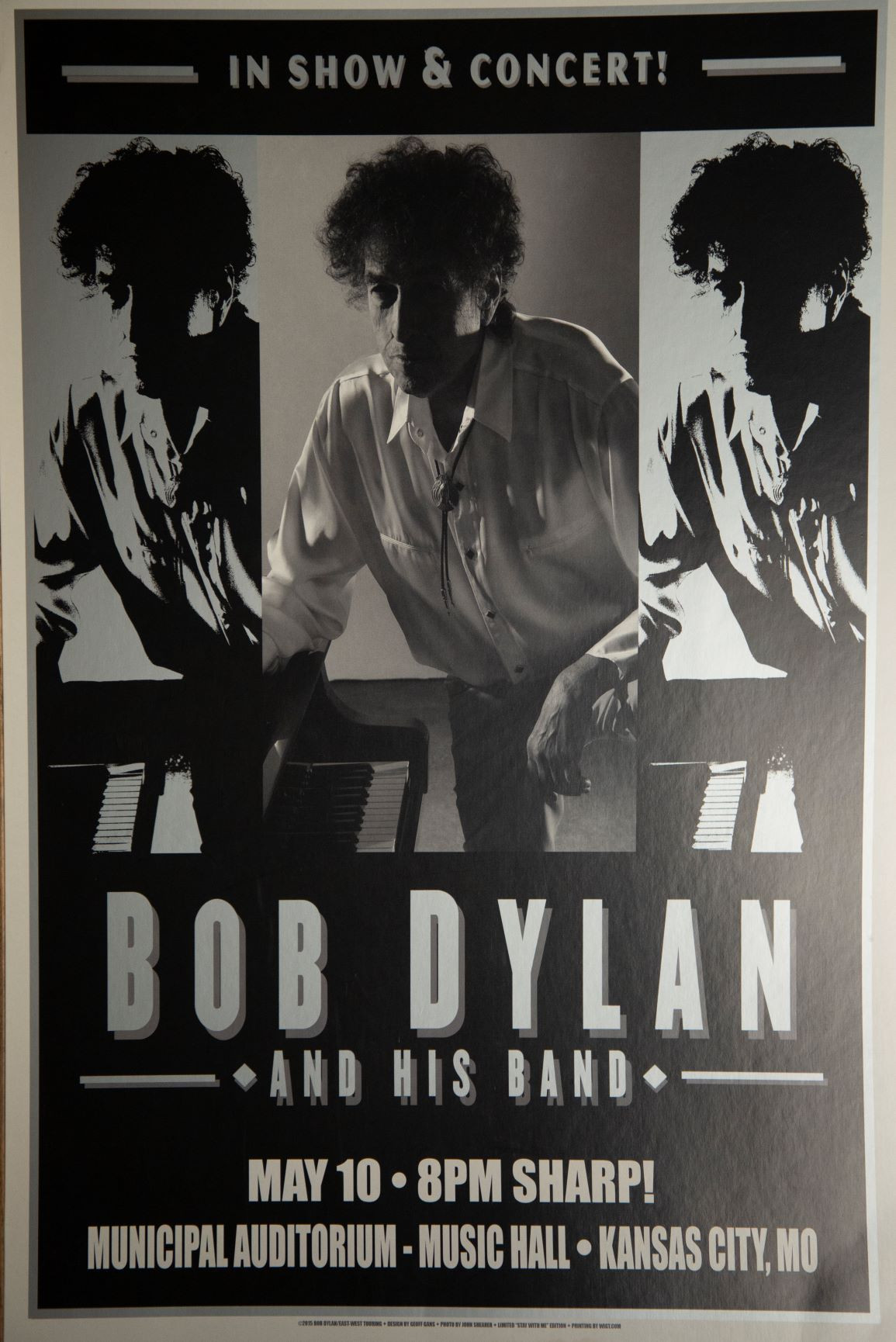 I’ve seen him twice since, including a show at the Music Hall in 2015, when he was showcasing his “Shadows in the Night” album, a collection of pop standards made famous by Frank Sinatra.

He would perform only two of its songs, “Autumn Leaves” and “Stay With Me,” but the spirit of that album imbued the rest of the set and transformed Dylan: He crooned, like a lounge singer. Lyrics were discernible, as were melodies. He vamped, danced and swayed a little. And smiled. He appeared to be having fun.

Scores of books and essays have been written about Dylan and the dynamics of his live performances. He is a paradox: An intensely private and reclusive artist who tours relentlessly, averaging nearly 100 shows a year, hitting cities large and small, like Normal, Illinois, Mankato, Minnesota, and Moon Township, Pennsylvania.

On stage, he can be maddeningly mercurial and mysterious—inscrutable, at times. Yet he continues to draw large audiences and inspire hagiographic praise. His website features a “HYPE” tab with links to essays and articles. Among the headlines: “Bob Dylan 2018 is one of the greatest shows in the history of rock,” and (from Esquire) “Bob Dylan is the greatest American singer of all time.”

Dylan turned 78 in May but he shows no signs of slowing down. He has nearly three dozen shows booked from Oct. 20 to Dec. 9, an average of two every three days. It includes a 10-night stand at the Beacon Theater in New York.

He restarted this leg of his tour on Oct. 11 in Irvine, Calif. The show attracted a lot of attention for a few reasons: Matt Chamberlain has replaced long-time drummer George Recile; Dylan has added a guitarist, Bob Britt; and the set list included some rarities, including “Lenny Bruce,” a song he hadn’t played in more than a decade.

It’s folly to wonder what to expect at Sunday’s show at the Midland. Except: Be prepared to accommodate the unexpected. To quote a headline over a Washington Post review of a show in November 2017: “A Bob Dylan concert is still a challenging as ever. But why try to change him now?”

—Timothy Finn wrote about pop music for The Kansas City Star from 1996-2018. He now writes for IN Kansas City magazine and co-hosts Thursdays with Timothy Finn, a weekly show with Jon Hart on 90.9 The Bridge.

Posters submitted by Dylan enthusiast John Mulvey, who sat down with Flatland's Chris Lester for a chat about the artist. Read more at this link.

July 24, 1986: Sandstone Amphitheater with Tom Petty and the Heartbreakers