In the mid-1990s, younger bands began to emerge and add new dimensions to that sound. Among them were two that made significant waves outside Kansas City: The Get Up Kids, an indie-rock band that is still touring and recording (including the stellar “Problems” album from 2019), and Frogpond, which started as an all-women band and released two albums before disbanding in 2000.

We talked to founding members (and chief songwriters) of both bands about their experiences in the music world going back 25 years or so: Heidi Phillips of Frogpond and Matt Pryor of the Get Up Kids.

What was your relationship to music in the early to mid-1990s?

I also spent a lot of time writing and practicing. I was very immersed in music at that time; it consumed my life.

Matt: Music was the only interest I had growing up. I would listen to records for hours in my room. A friend who went to an “alternative” high school got me into Kill Whitey. Boys Life was my favorite local band, and they brought me to Giants Chair, Vitreous Humor and Kill Creek. Jim Kaiser was the record store guy who got me into so many new and experimental bands. I didn’t have an older brother to play me records and I’m lucky that I met him at that point in my life.

What bands do you remember seeing live at that time?

Heidi: We lived in Lawrence for a bit so we would go to the Replay Lounge often to see whatever touring act was coming through town. Then in Kansas City we lived just down the street from The Hurricane so would be there often to see shows. We were also touring and playing out a lot, so a lot of the shows I saw were ones we were playing.

Matt: The Rhumba Box was a pretty transformative experience for me. I was 15-16 and was not only going to shows but working them. It was the first time I learned that there was an “underground” scene for music, that bands could tour even if they weren’t famous. To name a few: Brainiac, Man Or Astro-Man?, The Coctails, Girls Against Boys, Shelter.

When did you first start creating your own music and what bands or albums influenced that music?

Heidi: I first started writing my own music when I was 17 or 18 years old, just in my bedroom, more acoustic-type stuff. In retrospect, I’m not sure of my influences, I was just trying to write something that caught my ear and try my hand at writing, so my influences were all the bands I listened to at the time: U2, The Cure, The Church, R.E.M., Indigo Girls, but I wouldn’t say my early stuff sounded anything like that. It was just acoustic guitar in my bedroom, though the Frogpond song “Sleep” was actually written at that time.

It wasn’t until I was a little older, 20-21, that I picked up an electric guitar and started Frogpond. That changed my style of writing significantly. And of course I was very influenced by grunge and girl rock bands.

Talk about the Kansas City music scene/community when you got started. How supportive was that scene?

Heidi: I think there was some competition between bands, but overall everyone supported each other and worked to book shows together and build relationships. I believe the first show we played in Kansas City was at the Rhumba Box with the band Shallow. That started a good relationship with that band, and we played a lot of shows with them.

I feel like we were well received for the most part. Of course there’s always the hecklers and the people who didn’t think girls should be playing loud electric guitars, but, you know, that doesn’t matter.

Matt: Well, at the time we didn’t really feel supported. Looking back, I wonder if it’s because we were young. In ’95 and '96 there really weren’t a lot of all-ages places to play. We’d play house shows, the VFW Hall and Gee Coffee, but it seemed, at the time, that the “scene” was in the bars. 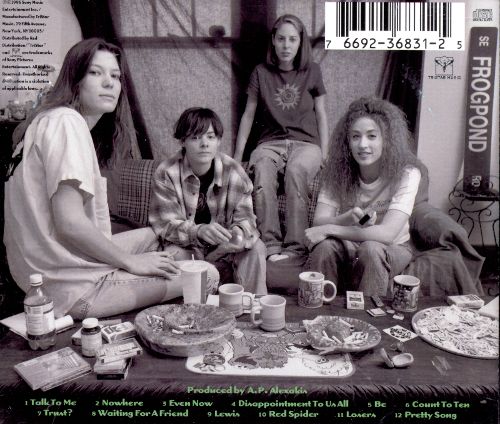 Frogpond had some big breakout moments: a prominent article in Musician magazine; Art Alexakis of Everclear produced your first album, “Count to Ten,” and you got some serious love from R.E.M. – getting invited to play an end-of-tour party. When did you realize this band was getting bigger and recognized well beyond KC/Lawrence/Warrensburg?

Heidi: Yeah, that was pretty awesome and overwhelming at the same time. In a way it was the beginning of losing control of the band. It was on a course of its own. It wasn’t always easy to make the right choice or to know which choice was right for our future. Sometimes what seemed like the best choice turned out to be the worst, but you can only see that in retrospect.

I don’t really think we were well prepared at all, but time waits for no one. It changed in the fact that we were now playing sold-out shows. I remember after “Count To Ten” came out and we were getting some radio play, we played a show at the Rusty’s Last Chance Saloon in Manhattan, Kansas, and as we were playing, people started singing along to our songs. That was an awesome feeling.

“Four Minute Mile” was essentially The Get Up Kids’ breakout moment. What do you remember about that — what was the moment when you realized things were getting bigger?

Matt: For some reason, Anne Winter gave me a job at Recycled Sounds (record store) even though I had already started touring and was only going to be home sporadically. I have a crystal-clear memory of someone purchasing a “Four Minute Mile” LP from me at that shop. Not knowing I was in the band, the person asked me if the record was any good. I told her it wasn’t. She bought it anyway.

… It felt pretty gradual and hard-earned. We were touring 200-plus days out of the year. So it wasn’t an overnight thing that we weren’t prepared for; it seemed like a manageable pace. I think it may have annoyed people back home. We weren’t “hometown heroes,” we were the band who had to get out of Kansas City to find success. 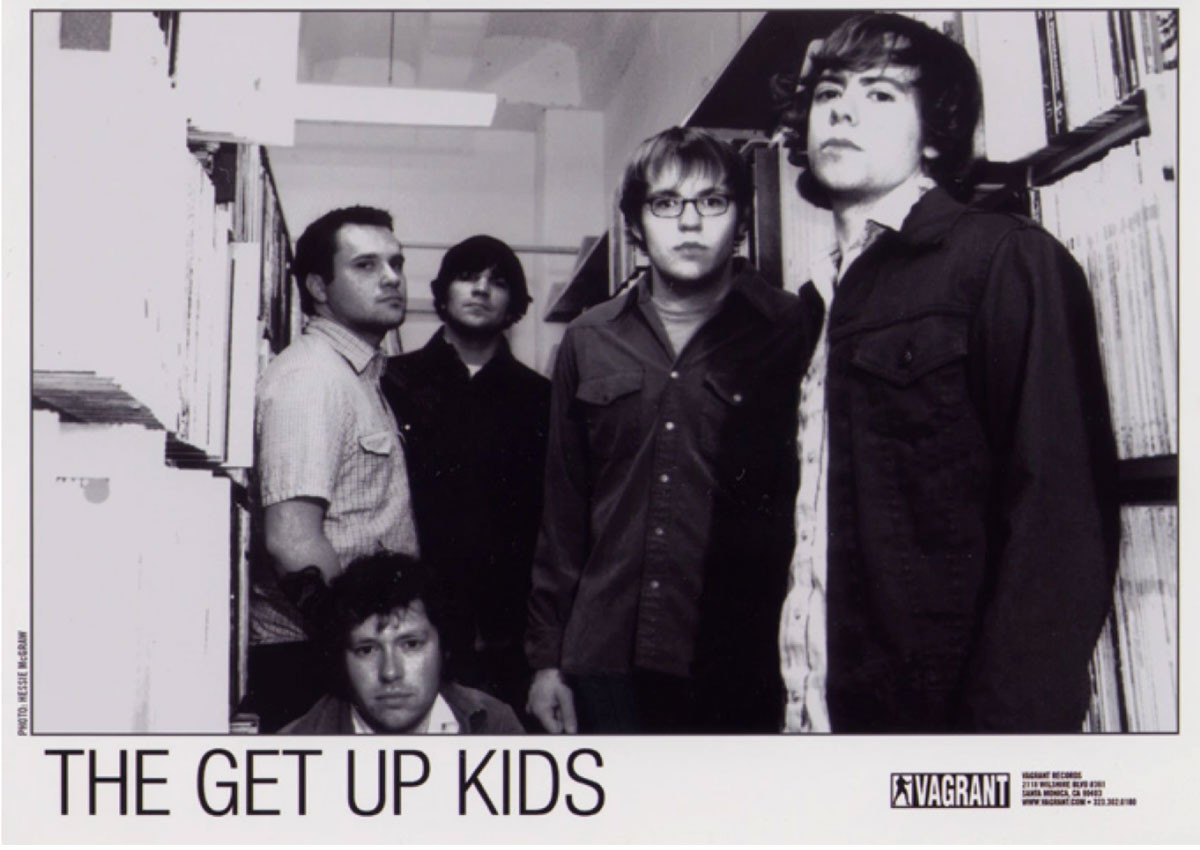 The Get Up Kids' '90s promo photo via Vagrant Records.

Describe your experiences with record labels back then.

Heidi: Our whole relationship with record labels was very difficult. We were signed to Relativity Records and as soon as we did, they decided to drop their alternative department and just be an R&B label. So we were moved over to Columbia Records with some other bands, Our Lady Peace being one of them.

We did not like that move because we were trying to build a grassroots following but of course we were glad not to have been dropped. Eventually we were able to work a deal where our first album was put out on Tristar Records and we had a great relationship with them. The team really worked hard on the distribution and promotion of the album, but then there was a long break in trying to figure out next steps.

In the end, I felt like our voice was lost at Columbia and we weren’t a priority to them. But what can you do? I would have rather been on a smaller label where we were a priority. Frogpond was never going to be able to compete with super pop stars and we never wanted to. But that’s kind of where we ended up.

Matt: The labels that we’ve worked with over the years who thought of our relationship as an equal partnership have been great. Especially Polyvinyl, whom we are currently working with.

What are your general impressions of the 1990s musically, as a fan and a musician?

Heidi: Well, I hear '90s music on the radio often and to be honest, I think it’s some of the best writing out there. I think the '90s can match up with the other great rock decades in its own way. Songs were catchy and they stayed with you, but they also had heart, and that gives a lot of them staying power.

Matt: I was a teenager-turned-musician in the ‘90s. I was seeing the world through a windshield of a Ford Econoline. So it’s always going to have a special, positive association in my head.

I think everyone bonds extra personally to that time in their life and the music that they were listening to. I didn’t go to college; those years were spent on tour. Those were my “college years,” and the soundtrack to that time is profound to me. So I can’t rank it objectively compared to other decades. I'm too heavily invested in it.

—Timothy Finn has been a writer/journalist for more than 34 years — 29 of them at The Kansas City Star, where he was a news editor, copy editor and page designer for seven years before becoming The Star's pop music writer/reporter in 1996. Other places of employment include The Detroit News, USA Today, The Topeka Capital-Journal and the National Catholic Reporter. Since June 2018, Tim has covered music for IN Kansas City magazine. He hosts Thursdays with Timothy Finn on 90.9 The Bridge.